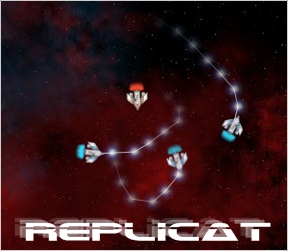 In Replicat, from Mindless Labs, we see the same innovative mouse avoidance mechanic employed in Time 4 Cat, only this time with the warp drive pushed all the way to "insane."

You start off as a starship pilot just minding your business, plodding along through the vast empty expanses of space, when all of a sudden the hyper-drive malfunctions. This can't be good. Somehow the hyper-space jump manages to break reality just a little bit, and as you pop out the resulting wormhole, you realize that replicas of yourself will soon be hot on your tail. Your only chance now is to visit planets as they materialize in order to learn how to make the copies of yourself go away before they inevitably ram your ship and send you to the space version of Davy Jones' locker.

Like Time 4 Cat, this is a mouse avoidance game where the speed of the objects to be avoided are based upon the speed at which you move your mouse. Don't ever want to die? Simple, don't move. Unfortunately, the collectible objects are not on the same malleable timeline, and their point value decreases constantly whether you are moving or not.

Where Replicat diverges from its intellectual predecessor is not only in its sci-fi theme, but in the fact that the objects you are forced to dodge are copies of yourself. Each new starship on the scene apes the path that you've been taking all along, and the longer you manage to stay alive, the more of them there are. This adds quite a bit of depth to the formula, as you not only worry about the present, but think about the future, plotting a course now that will be easier to dodge when your lethal copycats trace it.

Add to this a side quest or two and a very neat sort of power-up that lets you see the immediate path of your counterparts and what you have is a surprisingly well fleshed-out game based upon one of the simplest gameplay mechanics in casual games. As more copies present themselves, the tension quickly builds to manic proportions, while the ability to effectively choose your own playing speed really makes it accessible.

Is there any point in saving Stella, apart from the obvious guilt trip if you don't?

I accidentally missed her on my first playthrough, but saved her on my second...dang, the difficulty ramps up when you're trying to save both ships.

As far as I could tell, there was no advantage to saving stella. all I saw was her saying "Hurray" at the end of level three.

Reminds me of ReRun, which is a good thing. Time-travelling = fun!

I randomly entered numbers into the level code thing and came up with this interesting setup:
349042367

Only a short game, but tbh I'm busy these days and would have had time for a long one.

I have to say it's a beautiful game around a pretty genius concept. the difficulty ramp of increasing replicators (moving more and more eratically as I had to to dodge them is countered by the ability to slow down to do delicate manoeuvres.

Also, when you think about it, every replication automatically dodges all those before them, so no replication will ever collide :P

Have to say: one of the best i've seen in while

Really enjoyed this, although I couldn't save Stella. Best tactic I found was to move around in a circular pattern, running a course around the whole field.

Hahaha, my replicants always seem to know exactly where I'll be next. Although maybe I shouldn't try to dodge everyone at once like a mad fighter pilot.....Which is exactly what I am!