There are few things I love more in this world than a nice turn-based strategy game, and Dmitry Kozlov's post-apocalyptic Renegades, which draws inspiration from Xenosquad, Zombotron, and even the Fallout series, definitely fits the bill. Throughout each level, you may guide your lumpy-faced squad through danger to finish their objective, carefully utilizing the terrain and cover to make their way through safely. Sometimes you may need to defend a location from a zombie horde, others you may need to get your party all to a specific location, and so on. Click on a hero to highlight spaces they can move to in green, and then click on one of those to go there. If an enemy is within range, they'll display as red, and mousing over will give you your percentage to hit as well as possible damage. Every hero has their own Ability Point pool, and certain actions take more points than others, so think carefully about where you go and what you do with them. Once you run out of moves, you can end your turn and the enemies will take theirs. When you finish a level, you'll be awarded stars, and thus sweet, sweet, cash, to spend on purchasing equipment for your party members. Any character can be outfitted however you want, but pay special attention to each level's objectives. You may need a grenade to blast open a door, or a smoke bomb might be best to give your crew a bit of extra cover. 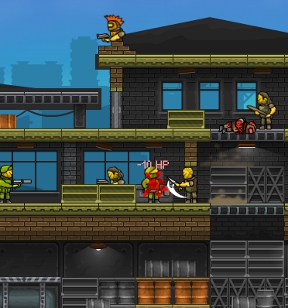 Though it lacks a lot of the bells and whistles and deeper customisation of other games in the genre, Renagdes is a solid little turn-based strategy game that has some great ideas. Control is simple and intuitive, though a visual representation of how many AP you need to move/attack would be nice, and the wide variety of level objectives keeps things feeling fresh throughout. More heroes will be unlocked as you play, and tweaking their loadouts can make a drastic difference in the difficulty of a level. The downside, unfortunately, is that some objectives can be frustratingly vague. Your first defense level tells you to keep zombies out of the "store" for eleven turns, for example. What constitutes the "store" isn't really defined since you'll get a game over if a zombie reaches an area that's actually outside of what the game designates the zone to protect. Further, the definition of an in-game turn seems likewise nebulous, here counting for each character moved or slain, rather than when both sides have moved all their characters. Despite its flaws and bumps, however, Renegades is a title filled with promise and potential, especially for a more developed sequel somewhere down the road. Though you can see the clear influences, it's neither Xenosquad, Zombotron, or Fallout, but it's still a game with a clearly impressive amount of work behind it that serves as a casual entryway for newcomers to the genre.

Not to be a jerk, but a hoard is what a dragon puts all the treasure it steals into. A horde is a large group. Unless the game really does send living treasure stolen by the zombies to attack you or something...

A useful note: empty item slots are automatically filled with spare ammo/clips. If you want to buy the hammer soldier a gun, for example, you'll also want to unequip a grenade or two so that he has enough ammo.

Annoyingly there doesn't seem to be a way to redistribute items. Unless I'm missing something, it looks like to give a soldier grenades you have to buy them, even if you have spare grenades unequipped on another soldier.

Horde, not hoard. Sorry for being nitpicky, it's one of the few misspellings that triggers a knee-jerk OCD desire to correct spelling.

"Unless the game really does send living treasure stolen by the zombies to attack you or something..."

(One of the zanier monsters from the original Wizardry computer RPG.)

Very much enjoyed the game. Three suggestions for improvement -- the third is the most serious.

2. Something should happen at the ending.

3. It needs to be more challenging. It was way too easy. I messed up a few times quite badly -- accidentally grenading my own characters, stepping on mines (see 1), leaving characters exposed, but still I won basically every time, and almost always with 3 stars.

I find the defending of a building weirdly easy. I'm not sure it's supposed to be that way. It says to defend it for 10 turns for example, but it counts every turn as 2 turns I think, so you only have to defend it for 5 turns, and the enemies don't even reach the building in that few turns.