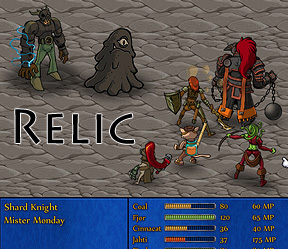 Up until now, Hyptosis has mostly turned his considerable artistic and storytelling talents to point-and-click titles such as his Alice is Dead and Hood series. In his new game Relic, he's trying out the RPG genre to tell the story of a woman seeking to recover an object that might destroy everything in the wrong hands, with the help of two cute comic relief characters and two strong and sexy types.

It's a streamlined and focused journey, with no inexplicable detours into side quests, a la "We must catch the kidnappers before they murder my love! But let's stop here and gather 100 wolf pelts for this old dude!" You travel using the [arrow] or [WASD] keys (switch the controls via the menu) until you hit a random encounter, at which point everything becomes mouse-controlled. The fighting seems inspired by Final Fantasy VII-style Active Time Battle system, where enemies attack as soon as their turn recharges, so you must be equally quick with your own attacks.

It's only fair to say that this is pretty clearly a first effort, with a few rough edges and gaps. Mostly these are minor yet, at this level of online casual gaming, inexcusable annoyances, such as the inability to pause the game during battles. But the developer's sheer enthusiasm for game-making shines through regardless. The art in particular is some of his best yet, with imaginative designs for the various beasties that inhabit the world. A creature compendium to fill up with the engineer's "scanner" skill would have been a great bonus. It'll only take a couple of hours to beat this one, so the flaws don't grate on you the way they would with a longer game, and the game sets up an intriguing new story setting, one which we hope will be expanded upon in later games.

Hmmm...I don't understand the battle scenario. Nothing I click does anything, while the goblins seem to get round after round of shots at my team. The only info was that you use your mouse in battle. Is there more information? I assumed it was a basic "click the baddie, choose your weapon" sort of deal, but I've tried clicking the baddie, clicking the name of the baddie, clicking one of my characters. Nothing happens, except that the goblins each take another shot at me.

Playing in Chrome on a MacBook Pro.

Played about 20 minutes. I'm not a big fan of touch it to open it. There is no clear point to the flying creature, is it useful for something on the map?

Also I would say to make the damage numbers bigger and a in the fight mouse over description of the skills would also be helpful.

Okay why do these games always bug out towards the end, do the devs lose interest?

I would be interested to know if anyone has finished this game at all with the same problem.

At the moment I am fighting Sadat, whom I assume is near the end - he is totally frozen and not hitting my crew at all, neither did Vincent before him. Is this a bug with the freeze spell - or just general.

Up to this point it had been okay with a few minor niggles.

I think current mana/hp should increase when you level and not just the max available.

Why oh why does Cin need to know who to heal with a group heal from the skills window.

Fight scenes are too slow - and too slow to refresh once completed.

Well Freeze is for sure bugged ... one freeze and no more rounds from that mob. That also seems to apply to some mobs without casting freeze.

So, no vote from me, since I do not like to down vote something that has potential may get fixed later in its life

If I had to sum it up, I would say, has the ingredients but needs a little more mixing.

Same here with the freeze bug. At first I was worried when I saw the amount of HP the last three bosses have, but then they were permanently frozen. The worst part was just being bored while slowly chipping away at their HP.

This game had so much potential. I loved the Alice is Dead series and the artwork especially. But this game?

It lacked a strong base, a strong initiative to prompt us to play on. The only thing holding it together is our determination to get to the end. That's it. We didn't feel any connection to the characters, given the basic glimpse of an intro and the short dialogue. Controls felt weird too, especially the menu of skills etc while fighting.

Then came the ending.

My potions ran out very fast, so I had to teleport back and run through the whole map again just to reach the last battle. In order to do so, you run through other areas where you encounter EVEN MORE MONSTERS! Great. And I couldn't even beat them. They slayed me one by one, again and again. It became a boring clickity click of lowering hp and choosing the same moves. I eventually gave up and closed the game.

But nevertheless it is an okay game that deserves some credit, since the author put so much effort into the game. If you want to try playing it, go ahead! At least it fills up free time.

Stuff within - too easy, too hard, too annoying, beautiful game, helpful tip.

Too easy: the final boss, and Coldpath the impassable.

Too hard: high-damage monsters that pop up before their corresponding elemental weapon can be acquired.

Too annoying: not having a shortcut to inventory, not having a real pause button, and the leveling-up math that didn't quite work. It just seemed like a mishmash of items with wonderful descriptions but no connection to the gameplay. Honestly I think if the math of damage/leveling were worked out properly, AND instructions were clearer *on the screens where they're needed*, it would be much better.

Also, undo buttons in the menu need to happen. My mouse is trigger happy.

Huh: I have to go into enforced non-battle mode to read all the skills and items. In battle that information is suddenly unavailable to me. I guess it's "realistic" in a way... Great character design but their butts look odd. And was that a tavern where I can do... absolutely nothing? Did I miss something? Ditto treasure trove areas with not only no monsters, but no narrative.

I am not sure if I missed chests, because it was not at all clear until the last land what was meant by "behind objects." Do I click around until something says Too Far? I was hoping for some Memohuntress-like finding. There was for instance a chest in the labyrinth which I could not access. I would have liked to see this made clear, say on the first screen.

Just stock up on mana potions, the hp values for healing potions are too high. This is an eyecandy game, worth a casual play, but it does seem unfinished.

I've gotten as far as the Ardan Ruins... now I have no idea what to do. Can someone give me a little push in the right direction?

Leaving the interface/mechanics flaws aside, the game was all right and I wouldn't mind seeing more of the universe it's set in.

I felt that the locations needed more fleshing out. The game world feels 'empty' - not enough characters to interact with, or background to the locations.

Health and magic regeneration were handled oddly, I thought. The only way to regain health is by using healing skills or potions. As money is relatively limited (despite there not being much to spend it on), the most efficient method is to

use Cinnacat's healing spells on everyone and then replace Cinnacat's magic with the cheapest magic potion for 15 gold each.