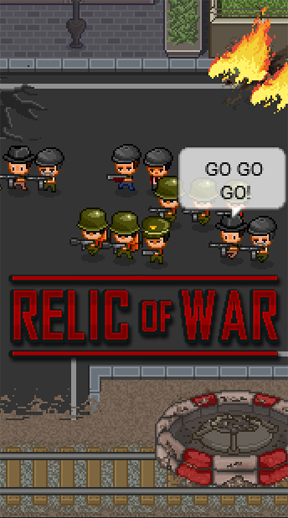 WWII was a serious historical event. Relic of War by Toge Productions, on the other hand, is a fun alternative-history strategy game with paranormal elements, isometric Wolf 3D aesthetics, and Nazis in miniskirts. Beneath the questionable storyline, however, is a solid strategy game that will have even the most snooty of history buffs cheering for more ectoplasm and mutants!

There are two episodes in the game, one for Axis and one for Allies. Right off the bat, you'll be presented with a generous upgrade tree and a handful of possible units. In each stage you get medals to put towards upgrades, which are well balanced and not too expensive. You also have some fun support options, like air support, medkits, and more advanced stuff later on. The [spacebar] cycles between the Units and Support menus, and the number keys call up air support and soldiers, while [WASD] scrolls across the screen, [Z] calls for retreat, [X] gives the stop order, and [C] blows the bugle and calls the charge!

Relic of War is beefy with options like the ability to individually micromanage your troops or let them "auto move." The added option is more a hindrance than a help, though, as the one-route-to-victory nature of the maps doesn't require a lot of detours. Mouse scrolling on larger levels is not as smooth as it could be and most players will want to keep "auto-move" clicked and commit the more useful keyboard controls to memory, clicking the few times its really necessary. Relic of War is clearly a flash game wanting to be a full-fledged real-time strategy adventure like the kind you passed around clandestinely on floppy disks and burned CDs in school. It would be nice if more games set their sights so high.

What makes some game developers think that when I turn the sound off in the options it means that I still really want to hear it in their various cinematics?

Axis- use the walker things and gorrila dudes.

I thought this was an excellent game; fun, addictive, mindlessly violent yet cute as a button. My only niggle would be that I couldn't find an option to make it fullscreen - if it's there, please tell me where!

Reminded me of my misspent youth playing Command & Conquer on the Megadrive. :)