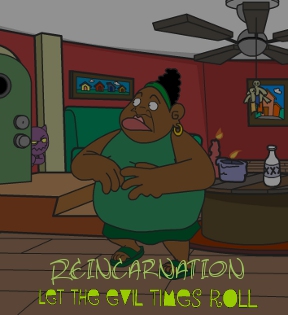 And you thought your job was a pain? Reincarnation: Let the Evil Times Roll puts you in the shoes of a certain familiar little purple demon who's been tasked with chasing down some Reincarnies; souls who have managed to escape back to the human world without the say-so of your boss. To track them down you'll have to perfect your point-and-click skills in old New Orleans... and maybe even track down a plague of locusts while you're at it.

Click on the screen to interact with various objects, and pick up items; once you've picked something up, click on it in your inventory, then click on another item you're carrying to try combining it. Some items can be manipulated with levitation; you'll know them when you find them because when you click on them... well, uh, they'll levitate. Obviously. Much of your obstacles will be in the form of humans, who you'll have to find some way to sneak around unnoticed. Even when you find your Reincarnies, you won't be able to take them back right away; you'll have to trick them into doing something that would earn them a one-way ticket to you-know-where. And bringing them back involves something a bit more gruesome than public transit. (Although not by much. Have you been on a bus lately? Phew.) 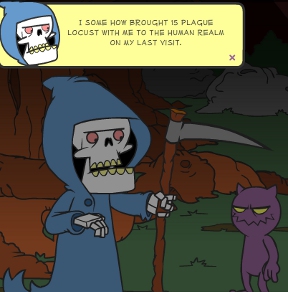 The downside is that the logic to the game is... well, it's just barely there. Puzzle solving generally tends to be an "everything and the kitchen sink" affair that could leave some players frustrated. Similar to the Reemus titles, the universe within the Reincarnations games tends to follow its own set of rules that won't make much sense to outsiders at first. Oh, you'll figure things out with a little bit of experimentation, but when you do make a connection it rarely feels like you puzzled it out... you just stumbled across it because you were patiently clicking everything against everything else.

The progression feels a bit rushed, as if it was intended to be a lot longer, and maybe a little more involved. Where the game doesn't skimp is its quality, featuring great cartoonish artwork and top-notch voice acting. (Which makes up for how obnoxiously intrusive the soundtrack is in the first area you explore.) Despite being a little on the short side, and ending rather abruptly, it's still a quirky little adventure to serve as a nice evening's snack. You know what they say, right? Laissez les mal temps roulez!

How do you get past the dog at the start?

Enjoyed it thoroughly, just as I did the other reincarnation games.

But it did feel rushed, the fact that;

it took a fair amount of time to get to earth, and the puzzle to get first guy, the other 2 were over in a minute or so.

...Also, did anyone else find it strange that you basically setup the first bad guy, before you are even forced to see him?

Finally, the official third game and not just another mini-game (which were all also awesome)!

Another Reincarnation game! I was wondering when #3 would come out!
I'm stuck after entering the human world, though...

This is my first walkthrough.

Take a stick from the pile. Look at the stump, then take the bark. You will find termites. Go left.

Click snake.Talk to death to start locust game. Click the locusts when they appear. Keep trying until you get it. Get poison. Go right.

Use mug on top hole on left tree. Get sap in cup. Go right twice.

Use mug on bag. Get water filled mug. Add poison to the mug. Use stick with mug. Get stick with sap. Go left.

Use stick on termites. Get tasty treat. Go right.

Wait until the woman stands beside juke-box, then click juke-box. Take scissors from desk. Go upstairs.

Use rope. Get tape from box. Enter bar.

Go left. See man. Go back to bar. Head back to man. Use scissors on sign above man. Enter gate.

Get rock and banana peel. Use rock on cracked window. Move barrel, box and tire then enter window.

Get crowbar. Use on bottom crate. Go upstairs.

Use stick on dog.

Use stick on human hanging from tree.

The crops are safe

The mask we wear

Take drinker's bone after he dies. Go back to room on balcony. Give the dog the bone. Open chest dog was sitting on. Take yarn. Take sad mask on wall. Combine yarn and mask. Medal get.

Knocked out the woman and have picked up the scissors, MArdi Gras Mask, Mirror, and Tape.

Now I'm not entirely sure what to do next.

KamenZero: I was stuck there for a while, too.

Combine two objects in your inventory, then use the result to block something indoors.

I hadn't actually gotten to the other indoor room yet to use the combined object. I had to find the rope first so I could actually get there.

I am stuck on the first part--found like 6 things to click on and can't parse out the next step. :frown:

I have a mug full o' diluted sap, and there is the dog, a snake behind a bush, and a little pink dude. Nothing seems to interact with anything else. There is a loose fence piece, but unable to remove it...

The very first mini-game was pretty much impossible given my level of dexterity and a laptop trackpad. Maybe later when I get home and can use a real mouse it'll work better :(

I was missing the right spot on the pile of sticks :/

Wow, these are really getting cranked out fast!

Sorry but the game never loads past 83% in ALL gaming sites.
Tried to clear the cache according to the support section but still doesn't work
Please help

How are you seeing 83% loaded? Whenever I load the game, there's just a loading bar, no numerical readout at all, but it loads completely.

Have you tried a different browser?

Tried Firfox and Goolge chrome
The bar just stops at about 4/5 even in newgrounds itself (firefox is even worse, the game window does not even showed up)
I've no idea what's going on

[Is your hard drive filled up by chance? Something is definitely getting in the way. Have you tried disabling your browser extensions (ad blockers and the like)? -Jay]

I enjoyed this game. Like all the Reincarnation games, the graphics are impressive, the gameplay is intuitive, and the humor is funny in a low-brow sort of way.

However, I feel compelled to ask: Is anyone else uncomfortable with the way race is depicted in this game?

I am totally stuck on the first minigame! I've opened the tackle box and dumped the carny into the sea with sharks circling, but it still says I have to make sure he's dead! Hellllp!

Punch a hole in the chum barrel with the knife from the tackle box.

cmdowns, you have got to be kidding :(

I'm stuck on the elevator area.

I've tried clicking the elevator button, but nothing happens.

I have a banana peel and the crowbar, nothing else.

@MmeTurbulence, I couldn't agree more. But unfortunately I'm away from a real mouse (and lucky to have internet access at all) for the next 5 days. Aaaargh!!!

To get all 15 locusts, be sure to catch the first 3 locusts on the opening screen or they'll fly off. The other 12 will be there when you return to the screen if you miss them the first time, but not the initial 3.

so, i found all of the locusts, but i went back to make the mask and java froze.
is that my award?

When it comes to this walthrough, am I the only person who just sees

and then a lot of blank space?

@Alexander: No, you need to click on the "Show Spoiler" button just beneath that. When you do, the walkthrough is revealed (requires Javascript, so make sure that's enabled in your browser).

If after making sure you allow the page to load completely and you're still not seeing it, please post what browser and OS versions you're using and I'll try to reproduce the problem, but we almost never hear about problems with seeing the spoilers.

im always getting stuck on the games. but i only have one question about reincarnation let the evil times roll. how do you get past the dog?