Please be aware that this game is intended to be played with an XBOX Controller, though keyboard play is not impossible.

Guess what? I've battled an endless army of samurai ninjas to restore honor to my throne!... Alright so that last one was vicariously through Fowl Play Games new free indie game, Reign of Blades. Reign of Blades is a beautiful, well crafted hack and slash action game where you must avenge the death of your mother and take your rightful place on the throne. Using your Xbox controller, defeat all the enemies by hacking and slashing with [X] and using the special powers with [B], given to you by wearing the mystical helmets dropped by your fallen enemies. While the makers recommend the use of an Xbox controller, it should really be said that it's nearly impossible to play without one. There are keyboard controls, but no instructions for what button does what, as all information on how to play is directed for the controller. The mouse is the direction you turn, but it's a real workout just to turn around. It's such a shame for those who don't have an Xbox because this game is just plain fun to play. There is a blink ability that lets you pop up all over the screen and take your foes down from behind and it just doesn't work as smoothly with the keyboard. But if you have a controller then you're in for a wonderful treat. 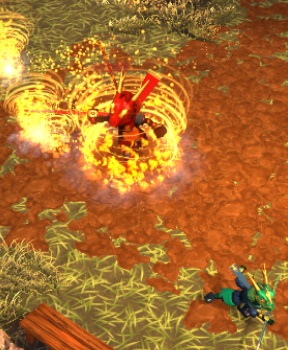 Reign of Blades is beautiful with the bright colors, and high detail even as you're slicing the foul minions. Even the little armor stand which you break to give you a random helmet (I call them fancy hats) has all the details of all the weapons you could get resting on it. The firework barrels you use to blow up enemies not only explode, but shoot the colorful rockets into the air as they do. The only downside with this is that everything looks so natural, as if they belong there, that they can be easily overlooked and you might not realise you can interact with them. A small price for such a beautiful looking game. Reign of Blades story is short and simple. There is no dialogue and the open sequence is probably only 30 seconds long, but it's so gripping and full of emotion you can feel the heartache and the vengeance this births. You won't even mind that it's a tad on the easy side.

Besides the Fancy Hats looking oh-so-cool and giving you their own version of a special attack, they give you armor. Every hit you take goes to the hat, which eventually gets destroyed but leaves you untouched. There is always another one lying around somewhere for you to quickly grab and keep fighting. Filled with minibosses (and a great final battle) and more minions you could shake a stick at it still won't be too much of a panic in the health department. If you ever run low, vases and boxes grant you red dots of health as well as blue dots to fill in your special attack bar, so death isn't really something you need to worry about. Even if you get in a tight spot, you can just keep fighting away as every blow you land in a combo does more damage than the last. Keep pressing on and you'll make it out in no time. If you want a great experience and some relaxing action Reign of Blades is there for you. So if you have been debating for sometime about getting a Xbox controller for your PC, this is just another weight in favor to do so.

Thanks to Christian, Paul, Prenton, Drew, and Austin for sending this one in!