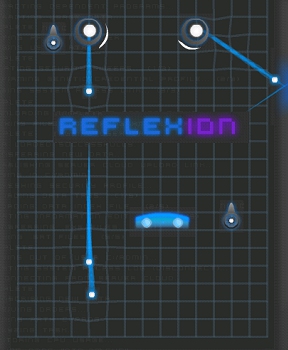 Pong and Space Invaders are two of the most beloved old-school arcade games of all time. Ikaruga and Portal both make the short-list of top modern classics. So what do you get when you combine Pong's bouncing, Space Invader's baddies, Ikaruga's polarity shifts, and a decent dose of Portal's plotting? ReflexION by FreeSparkGames. And while it might not be included in the gaming hall of fame like its inspirations are, it's a more than worthy way to pass an afternoon.

As relayed to you by a serious of briefings, a secret government computer has been infected by an virus that's insane, communist, and insanely communist. The only way to restore peace to the system is arcade hybrid action: Viral enemies and bosses will launch bullets, and you must bounce them back at them by controlling your paddle with the mouse or [arrow] keys, using the momentum to aim. What's more, starting in level 3, enemies will start to fire bullets of different colors. You can only reflect the bullets the same color as your paddle, changing your chrome with the [spacebar] (a colorblind mode is available). After each level you can add an upgrade to your paddle: increased paddle strength/speed, bombs launched with the [shift] key, a limited-ammo shooter fired with a mouse click or [Z] key, or a special combo modifier which, when activated with the [ctrl] key, rewards you with temporary unlimited ammo, invincibility or reflection. There are 10 nodes in all to free from the virus's control. The computer is your friend.

While the concept is solid, there is room for improvement. It's a little hard keeping track of which key activates what upgrade, compounded by how, sometimes, they don't seem to work as advertised. The recommended mouse controls can be laggy, making it hard to tell when you are about to leave the playing field: on later levels this can lead to a frustrating game over. Finally, there's no way to pause in the middle of a level, which feels like a strange omission.

The gameplay of ReflexION starts off a little simple, only really evolving beyond a Pong-clone once the color change mechanics are introduced. Then it becomes truly entertaining. This is one of those games that starts off simple but eventually leads to the frenetic fun of managing a hundred things at once. Also worthy of note is the writing: the briefings before each level are easy to skip, but you should really read them. I thought I had finished being amused by the ramblings of increasingly demented AIs, but this one is laugh-out-loud hilarious.

Despite some flaws, the presentation of ReflexION is consistently professional and will pass the time. While not wholly original, a combination of high-quality influences makes for a good time.

An interesting game. I can't seem to beat level six, though. But I must… for the people. Just kidding.

The Hot Potato powerup seems detrimental most of the time. Bouncing the shots back faster isn't that useful, the accuracy bonus is tiny, it seems to change the angle at which a shot gets bounced, which makes aiming harder, and making the shots move faster is downright dangerous against some enemies (I'm looking at you, level 9!) who can reflect it right back at you!

As for level 6, it mainly relies on knowing how to deal with the special baddies and clearing them out before more show up. For the spinning hexagon guys, use precisely aimed bullets to get through their shields. Throw out some C4 whenever you're overwhelmed.

The link point on a good game, but not this one.

[There was a temporary glitch in the server configuration file. Should be fixed now. -Jay]

The color-change mechanic is for the birds.