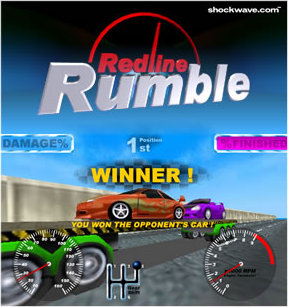 Take to the streets to compete against and win your opponent's vehicle in this street racing Shockwave 3D game. Redline Rumble features eight (8) souped-up racers of increasing grade of speed and style that you must earn the right to drive. The game starts you off on the low-end of the bunch and you work your way up from there.

At the beginning of each race, select your vehicle and the street racer you want to race against. Initially you have only one choice of car to drive, though you may select any of the opponents. The race is along a straightaway stretch of 3-lane freeway traffic that you must navigate through by changing lanes along the way to the finish. If you take any damage, simply drive over a repair wrench power-up to fix it on-the-fly.

Control is with the right and left arrow keys for changing lanes, up arrow for accelerating, and down arrow for braking. Change gears with the space bar: with up arrow for up-shifting, without up arrow for down-shifting.

Redline Rumble is an excellent Shockwave 3D implementation, and is a lot of fun to play. You will have to sit through a random commercial before the game starts, but this little racer is worth it. The game even remembers your progress, so you can come back to it later and continue where you left off. So, why are you still here?

Would be better if you could costomize your car, or had to build you own car.
also would be better if the stupid truck didnt run you over every time you tried to hide from the cops!!, that gets anoying after a while.

Maybe I'm dumb, but there seems to be one brief moment in which to overtake the opponent. Missing that opportunity will guarantee a loss.

i hate when i get wasted every time i go under the trucks! i want to know a better way to get away from cops.

i love this game it totally rocks.
p.s. - if u wanna get way from the cops then over take them 3 times then the helecopter drops down things that pop ur tire then if u get away from that then u have won the game !!!!! (well u didnt lose ur car anyway !!!!)
luv shorty !!

how are you supposed to beat levels when the cops come in and end the race theres no way you can win!!

i have beat this game and when the cops come slow down right beside the truck slowy move under the truck maintain your speed for about 4 seconds then as soon as the copter says where'd he go you can go on.

So....this game is a bit on the messed up side but i still need to know......why was this game made? THe question that puzzles us all. My age being 13 and my sex being female. People think i may not be 'allowed' to play this game. They think this is a 'mans' game. Being a bit of a daredevil myself i drive the GTA San Andreas. And this is the runner up.

Alright, all you have to do is stay behind the opponent's car but relatively close to the car, and then when the race is almost over and you see the finish, go really fast and chances are than you will beat the opponent by a nosedive!

p.s. i could never have won the game

Oh, I've seen this being played at my school xD

I'm not good at this game...No matter what I did I couldn't win.

hi this game roks ur site roks 2 heres a tip for the start if you turn right infront of the opponents car at the very start you can slow down his start so you can get ahead early :)

i won this game twice this is to easy all you you need to do is concentrate anywayz it rox!!!!!!!!!!

go under the semi

man cmon the third level is like so impossible
i dunno wat tod o when the cops comes.
i tried wat u guys said above but i stll cant make it

Nice game. I'm having problems getting the red car after the green one, but here's what I've noticed:

Before the cops come, it doesn't matter if you're leading or not. Just stay close, and keep yourself from getting too damaged. Once you get under the truck & the cops leave, then the race actually begins. Also, stay out of 5th gear. The car you race will only go a little faster than you, regardless of your speed.

every time i go under the truck the cops never leave. one time i was under there for 3 whole minutes and they don't do anything!!! why is this????????

The last car is the same deal as the rest of them, except it's got a much smaller margin of error. You'll probably have to do it a few times before you win it.

I have no problem with that.

This game rocks. and I agree with the turn right to prevent the opponents from getting ahead of us.

Certainly a toughy. Very annoying after a while, Especially when the silly truck squashes me everytime I try and hide under it.

How the hell did all the people that succeeded do it?

how do you use nitro with the number 8 car?

i dont hide from the cops, i always get squished. i just keep going and i've won the game doing that:)

Redline Rumble was one of my favorite games 3 years ago in 5th Grade. All the guys in the class would hog the computers and play this game. Or create Freewebs accounts, but that's a different story. I remember when I gained infamy as the first person in the class to unlock the yellow car. But then somebody surpassed me. :P

this game rocks but under trucks

this game is easy. if any of you want to know how to win this game then just ask me.

i've tried everything from above but i still cant beat the level with the green car!

How do you switch gears I cant even beat the purple car this game is hard!

finally beat the game ... although it's pretty anticlamatic you just get all the cars and the opposing garage still has all of the cars as they did originally.. kinda lame. I expeted some fanfare or something o, well .. it was worth it 3 weeks and countless hours of hearing horns , police, and wrecking cars.

How do I start this game over on a PC; it remembers what level I was at, but I want to start all the way from level 1... Deleting the cookie and history doesn't seem enough.

wow i cant beat the last 4 cars duue to the cops,,,, how do i not get the cops on me and beat it??? please reply

Dear Dudes,
This is a real good tip for starters: Start in the first gear, then hit space, wait ten seconds and hit space etc...
then you may ending up going at 120mph! But that is very fast and dangerous. to back up a ger, dont touch the arow keys and hit space.

I know how to get past the cops.Frist you make sure the helicoptor is infront of you.Then hide under the truck and the cops will go away

what happens if you win all the cars?

hard game, how do you shift down a gear? To shift up you press

I cant finish the level where you race against the yellow car.

Has anyone beaten the last car with the first car?

Good tip if you want to take the lead early on.

As soon as the race starts cut into the lane that you're opponent is in!

when the cops come if hide under a truck i get squashed and then if i keep going i lose and it says game over!! HELP ME PLEASE HOW DO I DO IT?

in level three the copter says at the end where did he go i think we lost him then game over so what can i do?

After you win all 8 cars the cars go to the oppents side . You have cars 1-8 and the oppent has cars 2-8 but it does not say congralosons or anything

I am only 8 years old

In the beginning of every race, go in front of them as soon as it starts going. Move right quickly!

thanks a lot guys

Have you beaten every cars?

But i have.But if we get everything we would start from first i cant understand.

This game is easy. Here are the tips.

Choose the first car. Your car won't get impounded and it doesn't make any difference.

At the start of the race, you can immediately go right one lane and override him but if you go to the cops you will be at 2nd place so why bother.

If you crash, you have to drop back to gear 1 and at 40 go to gear 2, etc. Repairing wrenches help but are not necessary.

For the cop, don't rush. Stay at gear 2, and don't crash. If your opponent's in front of you, release the up arrow and slow down. Don't override him, you have enough time. If you get to the side of the truck, release up arrow and move left and move at the same speed as the truck. When the cops say 'Where did he go' you can immediately leave (they are still here lol).

In the later levels, you will see trucks that stop your way. My way of doing it is to go into the other side of the road or the green grass rather than go through the truck. It's more safe and even if I crash I don't die immediately.

You have to be at gear 2 to completely override the traffic or trucks if you stay on green grass. Or you can choose to go to the other side and override which slows down speed less.

I recommend you do this for number 8. Then use number 1 to play against number 7 again. And then use number 8 against 2, 3, 4 (there are no cops so don't worry about impounding). for the remaining 2 decide yourself.

this game is messed up but really fun

does any1 know how to use IGnitro in the top end cars??

I need help for redline rumble 4. I can't beat any of the races and I don't know what to do I have 0000 points! Help please!?