Redemption Cemetery: Salvation of the Lost

The subway isn't the sanest place at the best of times, and today seems to be even worse. You're traveling home with your doggy in an empty train save for three strange figures. The only stop is at an old cemetery, where the three people get off... through closed doors. Your Spaniel doesn't seem to mind the eeriness, though, and jumps merrily out after them, so you follow it straight into the new episode of ERS Game Studio's hidden-object adventure series, Redemption Cemetery: Salvation of the Lost. 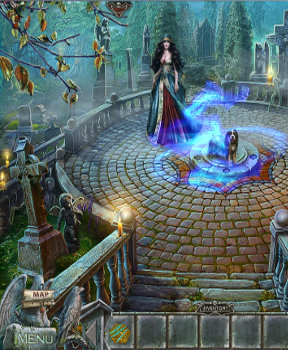 You are greeted by Hina, the beautiful keeper of the cemetery wafting on a cloud. She informs you that you have been chosen to save the souls of the ghosts from the train, who are tormented by their past transgressions. Each of them has caused the death of an innocent and wants you to go back in time and rectify their wrongdoings, making them the laziest ghosts in existence, since all they do is stand around with a mournful expression. Selfless as you are, you would have probably agreed to help anyway, but Hina still wants to make sure you don't bail out, so she's keeping your dog until your tasks are done. Each ghost opens a portal which takes you back to the past, right before the tragedies happen. Once there, you are supposed to locate the victim and make a plan to save them, all the while solving puzzles and rooting around for useful objects.

Analysis: The gameplay is standard for this sort of game: use your mouse to explore and pick up items, and your brain to figure out puzzles. You will also get a raven to bring you objects that you can't reach on your own. There are two types of hidden-object scenes: the usual rooms with a list of items to find, and a kind of hybrid, in which the wanted objects are silhouetted and you can often find only one or two; then you use them to find others and so on until you get to the item you actually need to continue the game. 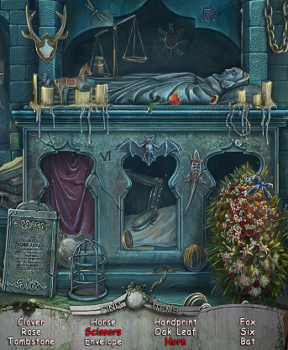 It is obvious that Redemption Cemetery: Salvation of the Lost was made by people who know what a good casual game should be. It is solid and consistent from start to finish and, even though it might not bring anything particularly new or ingenious to the genre, it is thoroughly enjoyable. It looks grim, but still colourful and beautifully detailed. The hidden-object scenes are somewhat monochrome, but not so much as to harm the gameplay. You might stop and scratch your head when faced with some of the puzzles; they are pleasantly varied and will exercise all sorts of your little grey cells. The storyline branches out in three directions, as you follow the fates of different ghosts, allowing for quite distinct environments and unique level design. However, if you're looking for horror, you're at the wrong place. The premise does sound frightening, and the opening sequence hints at spectral spookiness, but the ghosts are benevolent and penitent so, if anything, you'll end up feeling sorry for them. Speaking of non-scary features, throughout the game you'll find medals for your dog, and there is a whole section devoted to him/her. There are pet-related achievements, as well mini-games and puzzles which you play with the most adorable puppy ever to appear in a casual game.

Redemption Cemetery: Salvation of the Lost strikes a very nice balance – it is dark without being gloomy, it has a sense of humour but isn't comical, and it hops from cute to serious without losing any credibility. Therefore, it can appeal to a wide audience, including, but not limited to, people who like animals, people who want to get rid of a ghost phobia, ghosts themselves, time-travelers, goths (it really is a beautiful cemetery) and, of course, anyone who likes well-made hidden-object adventures. If you identify with any of the above categories, try this game, but be warned – you will get an irresistible urge to get a puppy.

Redemption Cemetery: Salvation of the Lost is currently only available in a Collector's Edition, which includes a bonus level, concept art, wallpapers, strategy guide and more. Remember that Big Fish Game Club Members pay only $13.99 for Collector's Editions (or 2 club credits), and collector's editions count 3 card punches of 6 total needed for a free game.