When you're in the wrong place at the wrong time and wind up witnessing a crime the criminals would rather unsurprisingly be un-witnessed, you find yourself abducted and buried alive. Fortunately for you, these thugs chose the wrong cemetery to bury their secrets in. In this latest installment in ERS Game Studio's hidden-object adventure series, Redemption Cemetery: Grave Testimony, fate decides to intervene in your gruesome end. But is this a power you really want to be indebted to? And does fate really want its champion to be someone who doesn't have the sense to climb out of an unlatched car trunk, or grab the gun sticking in your face out of the waistband of your merrily oblivious would-be murderer's pants? Seriously, what's wrong with you? You don't need magic birds, you need a Darwin Award! 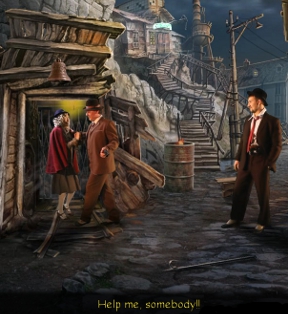 Turns out just because the gangsters who wanted to done you in got done in instead doesn't mean you're in the clear. The island they've taken you to is kinda sorta cursed, and to escape you'll need to pay a toll to one very unusual ferryman... three soul stones from three restless souls. As it happens, he isn't completely heartless, and lends you his pet crow, who can be paid with mystical runes to perform tasks for you that your meaty, earthbound self would otherwise be unable to complete. Search the island for clues, solve puzzles, and try not to meet the same fate as your kidnappers. Items in your inventory with a small green plus beside them can be dragged together to be combined into something new, so stay resourceful. With the help of some guilty ghosts, you'll be able to travel back in time to various locations, hopefully saving yourself as well as another innocent who wasn't quite so lucky. And hey, who doesn't love time travel? It's so... wibbly-wobbly! Just be careful, since not everyone wants you to escape the great beyond.

Analysis: As a series, Redemption Cemetery has come a long way. ERS always makes stunning games, but the first installment, Curse of the Raven, fell prey to ridiculous amounts of backtracking and repetition on top of a story that took a back seat to everything else. Grave Testimony does a great job of not only liberally spicing up the gameplay with twists and turns in its wonderfully ghoulish gangster plot, but also trying valiantly to keep the gameplay itself interesting and varied... and mostly succeeding. The tone is definitely campy throughout, and the whole "magical crow" concept never really feels like more than a gimmick, but it's hard not to get drawn into it. It's creative, it looks great, and it feels like it's having a lot of fun with itself. 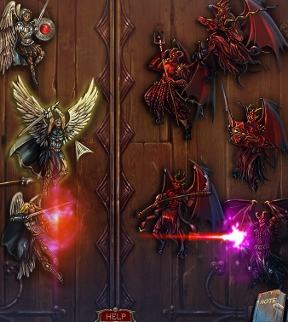 Some of the puzzles feel like busywork and are sort of eyebrow-raisingly odd, but should at least be applauded for attempting to avoid the cookie-cutter familiar types in hidden-object adventures. And speaking of hidden-object scenes, the approach of making them mini-puzzle areas in themselves is a clever one that, combined with how sparingly they're used, helps to keep them from feeling tedious and brainless the way others might. You'll still have to do a fair amount of back-tracking, however, and the game's habit of making an item vanish from your inventory after a single use only to turn around and force you to find almost exactly the same item all over again for another use can get obnoxious. Oh well. At least I'm smart enough not to hire henchmen who wouldn't drink a mysteriously appearing sleeping-pill laden cup of coffee just because it was there. Who's laughing now, game?!

Redemption Cemetery: Grave Testimony is a great choice for a little late evening lounge gaming, best enjoyed kicked back and with a bucket of popcorn. It's a decent length at over four hours for your average playthrough, and the wide variety of puzzles combined with the comparatively scarce hidden-object scenes will make this one much more appealing to straight-up adventure fans. Ghoulish, goofy, and full of otherworldly murders, it's definitely worth checking out the demo for this one. And maybe the next time someone tosses you in their car's trunk with the intent of driving you somewhere to bury you alive but doesn't latch it... hop out, huh? What's a little road rash compared to sleeping with the worms? Kids today, I swear.

Chapter 2: The Bar and the Workshop

The Coffee and the Sleeping Pills

Turning on the Lights

Chapter 5: A One Horse Town

Getting to the Ghost Ship

Pumping the Water Out

My error -- I was sure this would be a great game just from the opening cut scene. Oh yes, there is the stunning artwork, the live person video, but then it is just typical ERS. Even in Hardcore mode there was very little challenge. Unless of course you count the challenge encountered by some main game black bar info given in the wrong order.

Totally disconnected stories -- the first being the longest and best, simple puzzles, and a lackluster ending improved modestly but not completely by the bonus chapter�

Ah, the bonus chapter. Perhaps the most challenging of all. There certainly was some obtuse reasoning expected from the player. And one area near the end where you could not progress unless you followed the tasks in a precise order. That order, by the way, was given backwards in the strategy guide.

So, in the end, I felt ERS rushed this one out hoping the opening scene would lure you in. Unfortunately for me, it did.

Chapter 2: The Bar and the Workshop

The Coffee and the Sleeping Pills

Turning on the Lights

Chapter 5: A One Horse Town

Getting to the Ghost Ship

Pumping the Water Out