People are pretty split on what ninjas can do, or even if they existed at all. If you listen to gamers, however, ninjas can do basically anything and everything, including breaking the laws of the universe, which is way more entertaining than the History Channel, and way less traumatizing than Ninja Scroll. Red Warrior is a colourful puzzle platformer is an aggressively adorable little game where you play a red ninja out to rescue caged villagers from a group of bad ninjas. Using [WASD] or the [arrow] keys to move and jump, the goal is to first get to and then bash open the cage in each level, picking up any stars and gems along the way. You can even climb walls, and stick to most indefinitely. You'll quickly discover the path is often blocked by what seem to be impassable obstacles, but you have a trick up your sleeve... uh, if you wore sleeves, which you don't since you're a square, but stay with me. Pressing [Z] or [X] will flip the world around you, so while your position on the screen stays the same, you can flip the scenery back and forth to get around. A transparent copy of yourself will mimic your actions and serve as a marker for where you'll end up when you flip the world, though if your copy is crossed out, it's in a location that you can't flip to, such as inside a wall. 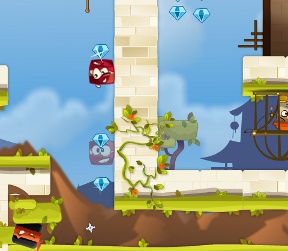 After a few straight forward levels, eventually you'll have to contend with finding keys and avoiding enemies, blocks you can't climb and blocks whose position you can't swap, and you'll discover that some stages will flip the world vertically instead of horizontally. The game winds up turning into a balance of simple puzzle solving as you figure out where and when to flip the world, and sequences that require a bit more action and reflexes, such as dodging throwing stars or changing the world in midair with proper timing. It makes for a nice difficulty curve on the whole, slowly dialing up the challenge, though players who prefer the puzzles may find the faster bits off-putting. It's also a beautiful little game, with fluid animation and bright, clean design that shines with a level of professional polish you don't always see. There's a great creativity to its simple concept, and that winds up reflecting itself in the level design, some of which are real stumpers. Red Warrior winds up being the sort of game that you wish there were more of... clever, fun, and accessible for just about everyone.

Don't press S, it appears to reset the game back to level 1.
Also, several times the game just wouldn't jump no matter where you pressed it.

No glitches or resets for me. Reminds me of Braid in how I had to keep rethinking the implications of the core mechanic. Very nice.

this is just like "flippin ninja". same programmer, it appears.

Hm, where is the third star in the second level?!

Ah yes, power of posting. Could've thought of that you have to use

abilities you only learn in a next level