Alice seems aptly named for a blonde little girl who finds herself in a strange wonderland. Except there is a lot less wonder and a lot more terror. But our brave little heroine is a lot more confident as she strives to find a way out of this horror story. Red Book: Discordia Tales, a remake of a game made three years ago, is a free indie game that has you solving puzzles and on your toes as everything here seems ready to kill Alice. Inspired by The Witch's House and Grimms' fairy tales, you can bet there are going to be a lot of jump scares, deaths, and gore for all those daring enough to open this book. The [arrow] keys are your source of movement, [Z] is interact, [X] is to cancel, and your inventory is found with [ESC]. Oh and [shift] is dash, which you'll soon find a very useful button to press if you wish to make it out alive. 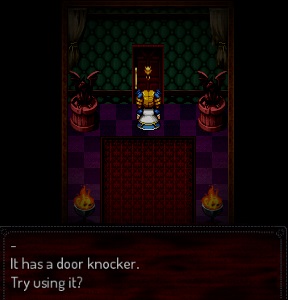 Red Book: Discordia Tales has a slightly different way of using items. You must select them in your inventory and then press [Z] again where you stand to try to use it with the object in front of you. If they don't work together, then nothing happens. But this system doesn't take long to get used to. Sadly, though, there are a few puzzles where trying random things on random objects is needed. Don't be too put off by this as there are other puzzles with clever little hints around, usually highlighted with orange text. As you go about trying to solve these puzzles, the ambiance is sure to have you on edge. If there is one thing done really well in this game, it's having you on your toes with the sudden noises and jumps this game is filled with. You'll never be quite sure you are safe until the game ends. Which it does probably before it should have. Red Book: Discordia Tales had a great chance to tell a chilling story, but instead of getting handed pieces of it as you go along, it's kind of dropped before you at the end. It doesn't ruin the game but it kind of is a let down to the potential it had. That being said it is more of a game than just a jump scare factory. There are some things to be learned about your character as you go along that aren't necessarily shown in the texts. So if you can have patience with a few hintless puzzles you'll be sure to enjoy all the chills and adrenaline rushes Red Book: Discordia Tales has to offer.

1 . Getting Out of the Bedroom

1. Read the sign on the wall.
2. Save the game using the bookshelf.

1. Enter the door in the left wall of the hallway and then the lower one.
2. Check the two musical stands and the pictures on the wall.
3. Move the black chair in front of the piano and try to exit the room.
4. Check the middle portrait on the wall.

1. Enter the first room in the right side of the hallway (north wall).
2. Push the cabinet to the left and go through the hole in the wall.
3. Check the painting of the moon and quickly get out.

4. The password for the stone column in the center of the hallway is

2. Getting out of the Hallway

1. Use the Lost Key from the stone column to unlock the door in the center of the north wall.
2. Once inside go forward until you find a shovel, then go back.
3. Go inside the east room and into the next one.
4. Use the shovel to dig out the soft soil in the center of the room.
5. Take the Winding Key and North room. Go north until you reach the room with the standing clock.
6. Use the Winding key and read the notes in the right corner.
7. Save the game and go to the north door in the hallway.
8. Run to the west room, enter the one in the top left corner.
9. Quickly pick up some Black Salt, stand one square away from the door and put it on the ground.
10. Once the monster is gone, go through the north door in the hallway.

To get rid of the statues which are blocking the door on the right wall, go into the library and read GREEN FAIRY BOOK 1

1. Go inside the top right room and enter the first door.
2. Check in with Mother Bear and check the notes on the nightstand.
3. Go to the library and enter the newly opened room. Grab the White Teddy Bear and go back to the upper floor.
4. Next to GREEN FAIRY BOOK 1 in the library, you’ll find an Old Room Key. Take it and head back to the upper floor.
5. Take the Lab Key from the black Teddy Bear.
6. Save the game and go inside the lab in the top left room.
7. Take the empty flask and get out.
8. Go inside the bottom right room and enter the first door.
9. Stab the statue with the knife and fill the empty flask with blood.
10. Save the game and go inside the bottom left room. Enter the second door using the Old Room Key.
11. Put the white teddy bear on the nightstand and use the blood flask on it.
12. Exit the room and follow the eyes.

1. From the main area head south.
2. When you reach the hole in the ground wait for the giant worm to appear and proceed once it’s gone.
3. Once inside the crypt, enter the double door to the north.
4. Go to the white faces on the wall and stab the second one (left to right) with the knife.
5. Take the eyes and exit as quickly as possible.

1. From the main garden area, enter the right door.
2. Go to the top end eat the mushrooms there.
3. Go inside the small door and take a look at the cauldrons and the mirror.
4. Take another look at the broken mirror and push the chair in front of it.
5. Pull the right leg from the hole.

1. Open the safe to find a Katana inside. The password is

2. From the main garden are, go inside the door on the right.
3. Head to the bottom side and enter the room.
4. Use the Katana to cut the pink bleeding dwarf in the bottom right side.

1. Go into the camping area and head north until you see a pink tree.
2. Use the Katana to cut the tree down.
3. Enter the newly opened room to find the Brain inside.
4. Go back to the camping area and use the knife on the dead wolf in the top left corner.
5. Pick up the heart next to the wolf.
6. Go to the room with the dwarfs and exchange the wolf heart with the one in the coffin.

1. Go into the crypt and grab an apple from the basket.
2. From the main garden area, go into the left door.
3. Put the apple in the blank painting.

I tried to exchange the heart but the game will not allow me to. I had the wolf's heart in my inventory when I was given the option but it didn't work.I restarted the game but the same thing happened.