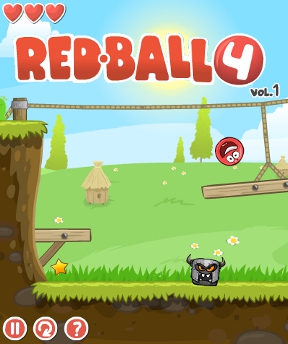 Red Ball 4, the latest in the physics platforming series by Evgeniy Fedoseev, has come a long way from 1, 2, and 3. From his humble beginnings, Red Ball has become quite the hero, and now he's actually out to save the world from being turned square by malicious blocks. Use the [WASD] or [arrow] keys to move and jump through the game's fifteen levels, avoiding hazards like enemies and water, and tagging red flags to use as respawn checkpoints along the way. Initially, you can simply hop on enemies to destroy them (or find ways to drown them if ya nasty), but later they'll become wise to your ballsy ways and start wearing spiky helmets, forcing you to adjust your tactics. Similarly, while rolling around with a goofy grin on your face will do in the beginning, later levels feature devious physics-based challenges and constructs you'll need to manipulate in order to get by.

Play all the Red Ball games:

The Red Ball series is one of those games where the developer's drive for improvement and evolution really shines. It isn't just the significant graphical upgrade, it's the whole package. Red Ball 4 not only plays smoother, it features a more cunning variety to its level design that really takes advantage of its physics-based platforming in creative ways. The physics themselves are, generally, mostly reliable, though they can force you to be frustratingly precise in your angles and speed to get the most height and distance out of even simple jumps. The initial batch of levels are also enjoyable, but don't really showcase much variety or ingenuity in a way that may not capture everyone's interest off the bat. But with a crisp, clean design and kid-friendly gameplay, Red Ball 4 isn't just a good example of one developer's impressive progression of skill, it's a good game, period.

There's a jump required in the beginning of level 14, off of a moving platform, which I can't seem to make happen. For whatever reason my red guys jumping ability is severely limited while the platform is in motion.

I liked this one better than the others, I thought the controls seemed to be much much smoother and more responsive.

Plus - even I managed to finish it which is saying something :)

Twice now, when I clicked "play," the game turned into a loud, jumbled mass of rapidly-changing menu screens. Annoying...

Also, I love the noise the ball makes when he falls off the screen. "AYAAAAAHHHHH!"

I want to get all the gold stars, but on level 12 towards the end you're suppose to jump on top of the charging bull squares that come towards you but every time I try I first have to navigate over water and it drowns itself before I get the chance to hit it.. other than that LOVE THE GAME, massive fan of this :D

4,465 Views
1 Comment
chrpa— Jayisgames needs your help to continue providing quality content. Click for details Welcome to Mobile Monday! The latest Nicolet is here with another lovely game, this time from the pyramid's catacombs. STUDIO MILLA (Ikumi Konya)'s escape is adorable and...  ...