Evil blocks are taking over the world! Innocent red balls are being forced into angular shapes! What's so bad about angles, you ask? They are sharp, I tell you! Sharp! Run for your lives! Or better yet, take control of a red ball and fight the usurpers in Red Ball 4 Volume 2, the latest physics platformer by Eugene Fedoseev. 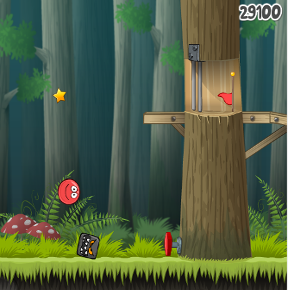 The story is the same as in the previous game in the series, and so is the gameplay: use the [arrow] or [WASD] keys to move and jump, and catch as many stars as possible on your way to the next level (also, try to stay alive). There are fifteen new levels, all well done and nicely varied. You'll face two types of enemies – the plain boring ones and the cool ninjas, on whom you have to jump twice. The controls allow you to maintain a tight grip on the lively protagonist, so there is very little unintentional slipping or sliding. As for the challenge, it should be said that Red Ball 4 doesn't exactly make your brain hurt. The levels are quite intuitive, so it never takes more than a glance or two to figure out how to finish them. However, depending on your skills, you might have to redo some particularly tricky stages a few times before you get them right, as they require perfect timing and don't allow for mistakes. This is where checkpoints really come in handy and save you a lot of frustration; even though the levels aren't too long, restarting them from the beginning every time would bite a bit chunk out of the fun.

Red Ball 4 Volume 2 is the whole package. It's got cute bright graphics, entertaining levels, nice music, decent controls and ninjas. You'll like it if you liked its predecessor or even if you've never played a physics platform game in your life. It's a short, sweet, bouncy bundle of fun you just don't want to miss.

3,343 Views
1 Comment
chrpa— Jayisgames needs your help to continue providing quality content. Click for details Welcome to Mobile Monday! After a few months, a new lovely Nicolet's game is out and you can return to their cute rodents' world. With APARTMENT BACON...  ...

6,340 Views
10 Comments
chrpa— Jayisgames needs your help to continue providing quality content. Click for details The beautiful warderobe bought cheaply at the local market had one flaw - the seller didn't have the key. But then a miracle happened - after river fishing,...  ...