We live in a fascinating age. Interest in science and the universe is growing, physicists and educators like Bill Nye and Neil Degrasse Tyson are bona fide celebrities, sharing the same couches on talk shows as A-list actors. It's about time some of that wide-eyed curiosity with the nature of our universe made its way online. Enter Rebuild the Universe, a fun and popular incremental and educational game that uses the very fabric of the universe as its currency. You start with "quantum foam", the absolute basest concept our current model of physics can conceive of, and gradually work your way up through the subatomic particles, making neutrinos and protons and all those other bits and bobs you half-remember from high school science class, until even cells and life forms become part of your journey. If you find yourself scratching your head trying to tell a prion from an angstrom, the game offers short, fascinating blurbs describing each particle you create. There's also a black hole you can dump your universe into for a permanent increase in atom production efficiency. Because when you want to make a cosmic omelette, sometimes you have to break a few cosmic eggs. 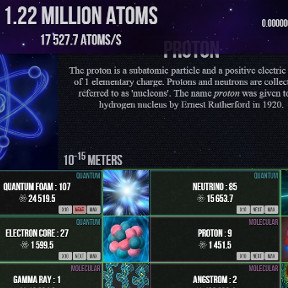 Like all incrementals, you get as much out of Rebuild the Universe as you're willing to put in. You can bust out some spread sheets and try to get all the achievements and bonuses in the shortest possible time, or you can leave it open in another tab while you do some homework, checking in only once in a while to see what you can spend your billions of atoms on. Whatever your technique, watching an entire universe flower into being at the click of your mouse is just downright fun. Cunning investments in expensive new forms of matter pay off brilliantly in the long run...or they waste your time while you wait for the atom counter to tick back up. Such is the strategy of the incremental. What's more, it's all factual and intellectually enlightening. Imagining how many billions of atoms must exist in the smallest grain of sand is downright impossible for the human brain. But in Rebuild the Universe you can actually see the numbers ticking up, thousand by thousand, million by million, billion by billion, until you can finally buy that new coffee bean or white blood cell unit you've been eyeing. It is a bit technical or "info dump" in spots but a little confusion is useful for education. Who knows? Maybe the next Stephen Hawking is out there right now, and Rebuild the Universe can help set him on his way to physics greatness! Or maybe Rebuild the Universe is just a fun little distraction that can make you feel like a god from the comfort of your own browser. It really is up to you.

Having fun with it so far! I agree that it is a little "info dump" at times, and the interface is a little clunky compared to other games of the same genre (Cookie Clicker, etc). But something about starting with the very basic materials of the entire universe and working up through to more complex stuff is just so satisfying! I guess you can sort of picture the universe taking shape, it's fun!

the OCD in me says 'thank you' for letting me just level up to the next 'upgrade' tier :D

This is a great concept, with a lot of good features (I agree, the "next" function is amazing), but with a really clunky interface. It's bad enough in full screen, but when you start out in half screen it's nearly unusable. I love astronomy, though, so the blurbs alone will keep me playing.

My only question is regarding achievement rewards:

It looks like each achievement in a particular category gives you a 1% cost reduction. It's impossible for this to be applied universally, as there are 19 achievements in each of the 11 primary categories. Does each achievement only apply within its category? And if so, do the bonus, special, universal, and achievement categories give universal bonuses? Some explanation would be nice.

After playing some more, I may have answered my own question, but I'm not sure.

It appears that when each achievement is awarded, it applies a universal price discount. This may be a one-time discount that applies to all unlocked units at the time of the award. If so, that's sloppy game mechanics IMO.

Achievements apply permanent universal discounts, but they're multiplicative, not additive. So, say a unit costs 10,000 atoms: a 1% discount is 100 atoms off, bringing the price to 9900 atoms; another 1% discount is now 99 atoms off the price, instead of another 100.

Seems I'm not the only one obsessed with this haha

Great fun so far, and more satisfying than endlessly hoarding cookies or candy or wood/stone/gold. But the scrolling and mouse-over spazziness keep me from being able to really enjoy it.

A bizarre hodge-podge of scientific terms with no correlation to be seen. It's a bit like if a hungover high school teacher decided to use wikipedia to make a science lesson.

Really cool, but I tried to get back on today and it wouldn't work properly. I still have my 14.6 tredecillion atoms, but the units screen is loading weird and showing I have literally nothing, my universe size is showing as 0, and I can't click any buttons. This is the first time anything's gone wrong. Nothing I can think of is helping, I've reloaded the page like 15 times already. I'm using Firefox, but that's what I've been using the whole time, so I have no idea what the problem is.

Same problems with Chrome. Still have my atoms but it looks like someone rebuilt the page.

Actually, I've changed something that screwed up saved game. If you wish to know the procedure to continue playing. See the subreddit /r/rebuildtheuniverse on reddit.
Truly sorry for what happened.

So if I feed the black hole, I lose all my increments and achievements, but increase my growth rate?

Every time I close and re-open the game (on Firefox, Win8), the UI goes all screwy. I fixed it, but now the game does not update my atom totals. I could still earn and spend them, but the counter in the upper corner stays at 1 atom.

I really wanted to like this game, but I'm not going to waste my time with a game that breaks every single time I stop playing.

Dear Jayisgames,
The "rebuild the universe" website appears to have been sold just over a month ago. Since then, the game is now unplayable, thanks to all sorts of bugs.
Do any of you brilliant people have a way of contacting the new owner(s) about this? I used to find it a relaxing and enjoyable time waster.
Thank you.

Most recent update: the game (website) is gone completely.

I'm playing the game now (it seems to have mysteriously re-appeared), and for unknown reasons, the "NEXT" button now just does the same thing as the "MAX" button, as does the 10x button (within the normal constricts, of course). I assumed that the red line through the button along with its un-click-able-ness meant that I couldn't afford that upgrade. Am I incorrect?

Update: the "NEXT" button seems to be working again, but all the options concerning units are unchangeable.

The new owner of the website has just made an updated version. Hopefully they have fixed all the bugs plaguing the game since June.
Note, now you click "spacemonster" to change your options. Always change to maximum speed immediately. It will still take over a week to complete, but it helps a lot.