Fans of the Rebuild series, rejoice! Fresh off her success with her Kickstarter campaign, Sarah Northway is offering those of us too impatient to wait for it a chance at an early release of the new game in the popular zombie survival/resource management series, Rebuild: Gangs of Deadsville. While still in "early alpha", according to the website, the game is already a rich experience with lots of new content and a much-improved interface. There is so much new in this version, in fact, it will take you hours to find it all, and yet Northway admits that only about half of her book of new content has been implemented, with much more on the way. In the meantime, there are cities to save from zombies, and a lot to love in this new iteration of a game we're already pretty ecstatic about. 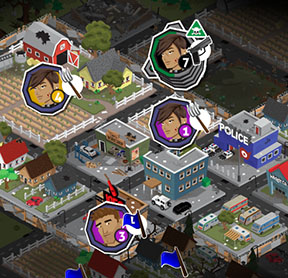 Right from the beginning, you'll be sucked into the new design like a spaghetti noodle in a cartoon (I admit, the preoccupation with food in this game never fails to make me hungry). If you've played any of the original games, you'll find much of the artwork familiar, including characters and map items. Northway didn't set out to change the basics, but rather to make the game she always wanted with a lot more depth and strategy, more story, and more tension. That's obvious the moment you choose your initial team and enter your first town. The first big wonderful change is the fact that you can see every team member right on top of the buildings you currently control. You can turn that function off, but why would you? It's a sleek new aspect of design that actually answers some of the critiques of the earlier games, allowing you as the leader to not only have a very clear idea of who you are leading, but to be able to place them exactly where you want them quickly and efficiently.

A few mechanics of the game have changed or been improved. Your citizens can slide together to form teams, or easily break apart to go on solo missions (such as research and crafting in the workshop). Drop a person or a team onto a mission area, and you immediately get a flyout graphic of all the possible missions they can undertake. You get a clear, detailed live menu of your food, happiness, and materials on the left side of the screen. Each of those items can be clicked for more information which opens in the familiar journal format of the earlier games. Factions have been given teeth. They can befriend or attack you, and their allegiances can turn on a dime. You can customize your town beyond just the size and difficulty level to include a river or coastline as well. The action list items that appear to the right of the screen can be opened for more information, or closed by clicking the red X. You can let the timer run, or hit the pause button and play it as a turn-based game depending upon your preference. 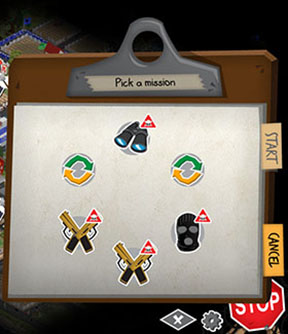 Analysis. All of these changes serve to improve functionality. The basics of gameplay are the same: manage your resources, recruit survivors, feed them and keep them happy, take the city back from the zombies. And you can do all of that to an amazing new soundtrack by Rupert Lally and Espen J. Jörgensen (collaborators on the Rebuild 2 soundtrack) reminiscent of things lost, of water dripping on abandoned buildings, of the harsh new world contrasting with the soft one that is long gone.

Other changes have added a rich story-telling element to the game. You can get to know the people in your compound. They each have a story to tell, and can be assigned perks which can help significantly with everything from food management to morale. You'll occasionally deal with Gustaf the trader, but now his trade function has considerably more depth, and you can engage in trade and have other interactions with the government and other factions as well.

It's impossible to play this game without comparison to the previous games in the series. It's not a reinvention of the wheel, just a re-imagining of all the things that could make the idea epic. There are certainly some drawbacks to playing at this point in game development. If you finish the first quest in a city, you are done for now--the end games we came to love in Rebuild 2 have yet to be implemented. It can also be confusing when a zombie attack hits - that animation is still in the works, and without a clear explanation of the consequences it can often seem that nothing has happened. There are certainly some kinks to be worked out, such as incoming events closing a mission you've just opened. And Northway admits the balance between the different difficulty settings is still being tinkered with. 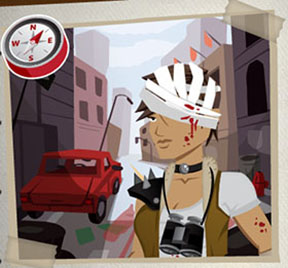 But keep this in mind - while Rebuild: Gangs of Deadsville feels like a huge game, it's still in development! This early release already provides a satisfying return to the game we love, with enough new stuff to fiddle with to make it different, and the promise of much more to come. The first of the major updates is headed our way in a few weeks, and we'll be sure to let you know when it arrives. That said, what you can start playing now has great tension, great replay value, enough new content to really flesh the story out, and enough of a design reboot to make it a new experience. If you just can't wait, you don't have to! You can pick up a copy of the early release alpha on Steam and be part of the development of this eagerly awaited edition.

This looks amazing. Any word on when the final version will be released?

Early Access, nowadays you are not only a free of charge beta-tester, you are even paying for it...

That's one way to look at it. The other is you're paying for a final copy of a game you already want, and are receiving the ability to leave feedback on the product every step of the way. You're not paying to be a beta tester... you're paying to play the game, just as you would at the end of the development cycle, and making the decision that you want access to it before it's complete. :)

Princess Sparkle, I can understand where you are coming from, but keep in mind that this was a Kickstarter project. All of the people who backed this at a certain level "paid" for early access. It would be bad business practice for the developer to then turn around and give "free beta" play to other gamers. Instead, she is offering all of us the chance at the same thing her Kickstarter backers got. And that is good thing!

I was not too happy with this one. When I established my town hall I there was a long questionnaire on my politics, and ended up with an unplayable game (low morale) because Mz. Northway was offended. I won't answer the questions the way she wants, so it's the garbage can for Rebuild 3. I suggested that 50 people struggling to survive together should share resources, you see, and everyone complained about 'communism'. That place looks like a commune to me.

Northway! Take the political quiz and associated punishment out of your game.