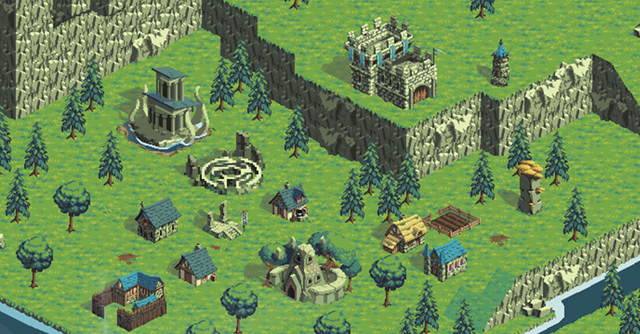 In Realm Grinder, you're the ruler of a kingdom, and you can choose to align yourself with the forces of good, or the forces of evil. As you click, you accumulate gold and faction coins. Your accumulation of faction coins lets you align with Fairy, Angel, or Elf factions while aligned with the forces of good, or Goblin, Undead, or Demon while aligned with evil. Your choice of alignments also chooses which types of buildings you are able to build.

Where Realm Grinder truly shines is with the multi-layered prestige system. Most idle games have a mechanism where you can restart your progress in return for some additional percentage of your earnings; Realm Grinder offers this in two or three different levels. First, you can abdicate to collect gems, which give you percentage bonuses on your production. After gaining enough gems (through multiple abdications), you can Reincarnate, which offers different types of additional bonuses, in addition to opening up additional parts of the game.

Reincarnations... this is where the fun really begins. After you've figured out how the six main factions work, you gradually open up more factions and capabilities as you increase the number of reincarnations and gems. Your next upgrade after the initial six factions is to allow you to sign treaties with either the Dwarves or the Drow, depending on whether you're aligned with good or evil. Soon afterward, you learn the ability to affiliate yourself with three neutral factions - Druid, Titan, or Faceless. After that, you can sign an agreement with the Mercenaries, which allow you to choose advantageous upgrades from any faction, in a quest for more gems and more power.

Additionally, the developers included the option to import settings during runs when you're affiliated with the Mercenaries, so that you can save specific builds - or more likely, use specific buids that are available online to accomplish certain things, whether that's to unlock certain upgrades, or to push through that last gem wall to be able to reincarnate.

As you progress in the game, you continually unlock new functionality. I've been playing the game for a few months now, and have reincarnated 25 times, allowing me to research different technologies and gain massive amounts of gold... and there's still tons left to unlock. I've heard rumors of a Dragon faction that unlocks around R46.

There's no such thing as "replay value" here - it all builds on the original game, with added capabilities around every turn.