If you're of a certain age (and don't try to front, we know you're out there), there is a distinct chance that you went to school with a folder, a binder, or even more that showed images of rainbow-colored cutesy animals frolicking around vaguely-inspirational sayings. "Follow your dreams and shoot for the stars!" Despite their distinct lack of neon colors, Pavlov Andrey's adorable band of animals has decided to act out all your awesome-rainbow-binder fantasies in Reach the Star. Literally! In this stacking-style puzzle game, create piles of cutesy critters tall enough to snatch those stars right out of the air! 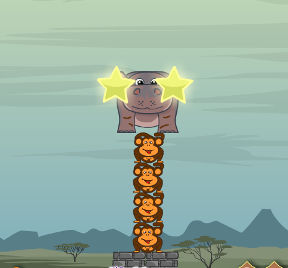 If you're a fan of stacking games, then Reach the Star is going to feel comfortably familiar. You're given a series of animals to put into the level, and you have to do it in a specific order. Just click to place them wherever you want. Though this gang of animal crackers comes in all shapes and sizes, they represent familiar blocks. Giraffes are tall rectangles, hippos are squat squares, sheep and pandas are roly-poly circles, and so forth. It does attempt to offer a few new things in the form of blocks that have specific interactions with each other, such as hedgehogs that don't like other animals touching them, and turtles that don't mind the hedgehog's spikes. But the main thing that Reach the Star brings to the table is its emphasis on balancing the animals in specific heights or positions to collect the eponymous stars. It's not the world's biggest twist on the stacking formula, but it does add something new to take into account when you're placing your critters. Just balancing the animals is usually not a headscratcher, but figuring out how to best grab those glittering prizes can be tough, especially depending on the order you're required to place the blocks in. Everything here is solid and the physics are generally in your favor, though they can be a little tippy at times. While it may not be a world-shaker, Reach the Star is just so darn cute, it's guaranteed to put a smile on your face while you scratch your stacking itch.

Put the two giraffes on the outside blocks as far to the outside edges as you can. Put the hedgehogs on their head's to get the stars. Then release the panda at the top of the screen. As if falls down quickly place the sheep in the slots between the center and left and right blocks. The panda should land on the sheep and hopefully not bounce around too much.

the curtains are bugged with the replay button...

Thanks, Rob. Did not know Hedgehogs could be used as Giraffe hats; thought those two couldn't touch at all.

@JFCLARK: If that's the impression I gave in my review, sorry! That one's my fault for oversimplifying.

The level which introduces the hedgehogs, Level 12, shows a small tutorial to the left side of the screen that shows that they can touch the tops of other blocks safely, but it is a little small. I was trying to condense the general idea of things, but if my condensation went too far and sent the wrong impression, that's my fault. Sorry all!