Consider the space marine. Grizzled, stoic, encased in enough metal to make a Buick. These sci-fi cowboys are invading every facet of pop culture, from the triple-A titles like Halo and Gears of War to films, books and everything in between. Well, the Raze games by Sky9 Games have brought the running and gunning action into the browser gaming universe, and Raze 3 offers more of the arena-based sci-fi shooting action you'd expect from the series. Use the [arrow] or [WASD] keys to move, the [F] or [Enter] key to use your rocket-repelling laser sword, and the mous] to aim and shoot your way through each of the fifteen levels in the main campaign. Or just settle into a quick match and start blasting away. Space marining is a tough job, but someone's got to do it. 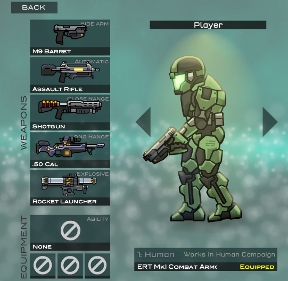 The story involves a pretty run-of-the-mill conflict between aliens, humans and zombies of all things. It doesn't affect anything beyond the odd voiceover, working more as a thin framing device for the real draw: running, jumping and shooting everything that isn't human. The game offers pistols, rocket launchers, and laser swords, as well as an exhaustive upgrades system which is almost daunting to explore. Every weapon can be tweaked to the minutest detail, which is cool even if it feels a bit like window dressing at times. Is your default pistol all that much more effective with an ergonomic grip? Not really but hey, it feels darn cool to have it. You can also mess with your avatar's appearance to your heart's content. The gameplay hasn't evolved much since previous entries but what's fun is fun, and some of the new backgrounds and levels are fantastic in both artistry and design. So play Raze 3 and teach those alien punks who's boss.

I remember playing this on AG when it first came out, and it was Extremely Glitchy. Now it plays very fine here. I assume they made a ton of updates and improved the engine. Very Cool!

Of Fracken Course. when i COMPLIMENT the speed and lack of lag, the game Slows Down and LAGS a ton. Someone NEEDS to study if these game are out to ruin our computers or something.