Surprised to see Rayman in a place like this? Time to reconfigure your expectations, as our limbless hero is making a run for the casual mobile market. Quite literally, too! Rayman Jungle Run from Pastagames brings the platform star to a new genre that feels quite at home on the iOS screen: endless running. Instead of randomly generated drab worlds, though, you can expect some startlingly lush visuals paired with challenges and abilities that gradually evolve as you play. It's such a good jump and run game, you'll probably wonder why more titles haven't adopted a similar layout! 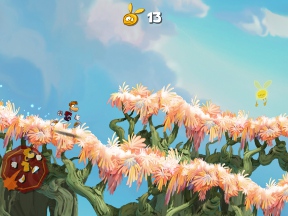 Ready to play? Good! Just tap the screen! Each level in Rayman Jungle Run starts you at a steady sprint, and all you have to do is tap the screen to jump. Leap over gaps and try to collect every floating Lum and coin you see, as the game is quite resolutely focused on perfection in this area. The more you grab, the closer you'll get to unlocking each world's bonus level, not to mention extras like wallpapers and achievements.

Rayman Jungle Run twists things around a bit with creative level layouts, adding swings and vines, trampolines, air lifts and reverse wall jumps, all designed to keep you guessing about what comes next. Guess you shall, and fall you shall, but get back up and keep running you also shall! The game isn't really about losing or winning, it's about running and coin collecting. It ends up feeling like Fancy Pants Adventure or a classic Sonic the Hedgehog game, which is exactly the right pitch to hit for this genre. 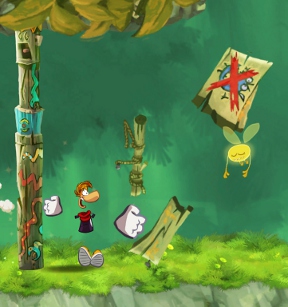 Analysis: Two words to reach out and nab your interest, just in case it isn't already captured: ukulele music! Rayman Jungle Run doesn't just play well, it looks and sounds amazing to boot. Gorgeous artwork fills your screen at every moment, including background and foreground illustrations that really make you want to stop and take a look at things. You won't, of course, because you're on a mission, but it's still a treat for your eyes. And is it just me, or does some of that music sound like something Bugs Bunny would have played?

Here's another smart thing about Rayman Jungle Run: levels are divided into four categories, each centered around a basic ability. In World One, it's straight-up jumping. Complete those levels and you'll get a little hovering ability. Work through that and you'll suddenly be able to wall jump. And after that? Punching! All very standard Rayman abilities any fan of the series will recognize, but seeing them in a new setting like this is obviously a little exciting.

It's a bit shocking to see a mainstream character perform so well in a genre usually reserved for smaller names, but when the game is this good, we certainly won't complain. A fantastic arcade game with a phenomenal audio/visual presentation. Can't get enough of Rayman Jungle Run!