Armless and kneeless, Rayman is still a surprisingly good sprinter. The release of Rayman Fiesta Run, a direct follow-up to Rayman Jungle Run, puts our star in a series of worlds littered with coins, lums and traps, all waiting to be conquered with a series of well-timed jumps. An endless runner at its core, Rayman Fiesta Run has all the markings of an addictive platform game, complete with scores to perfect, secrets to uncover, and loads of gorgeous artwork to drink in. 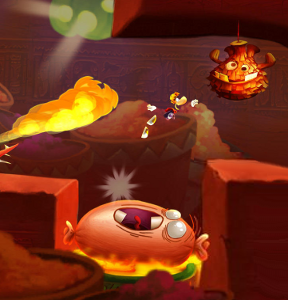 Rayman runs on his own, all you have to do is tap the screen to jump. Carrying this even further, you can leap off of walls, swing from vines and ropes, and even avoid massive boss enemies with quick hops, all in the name of grabbing as many coins and shiny lums as you can. The more you score the more levels you'll unlock, granting you access to 75 stages across four new worlds and bringing you closer to some fantastic new special abilities.

Rayman Fiesta Run is a solid action game, there's no denying that. It runs at a good speed that's at once manageable but also thrilling, throwing obstacles in your path that move at just the right angle so you can utilize them for an exciting sequence of leaps. Just making it to the end of the stage isn't enough, though. You'll want to go back and master each world, collecting all of the lums and seeing every sight there is to see. Rayman Fiesta Run is the kind of beautiful, well-tuned game that inspires you to keep playing for weeks on end. Fiesta time!