Ramble Planet is one of those quirky under-the-radar games you only get the privilege of stumbling across every couple of years. It plays like a scavenger hunt mixed with some RPG elements, though if you've been kicking around Earth planet for a few decades, you'll remember that most RPGs used to have that scavenger hunt feel to them. Ramble Planet simply takes that feature, intensifies it and peels off all the excess, sprinkling in some beguiling text snippets to spark your imagination. 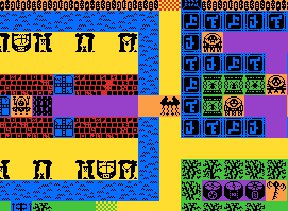 Ramble Planet starts off with a bit of bad news: your ship has crashed. Oops. It's smack in the middle of Badmark, an unusual planet that's one half frontier world, one half tourist hotspot (and one half bad mushroom trip, if you ask us). In order to leave you must locate replacement parts scattered across the planet's surface. In order to get those pieces, you'll have to defeat stubborn enemies, ride boats, dig up secrets, and do some serious item trading.

Here's how battles work in Ramble Planet: walk up to an enemy, bump into it, read the flavor text telling you about the foe and its level, automatically win if you're a high enough level. If you're not strong enough, you simply walk away, no sweat. It may sound anticlimactic, but the atmosphere it generates is one of puzzle solving instead of your usual RPG-style grinding.

Analysis: The graphics? Two color tiles, all the same dimensions. Combat? A single screen of text. Item screens, equipment rosters, story quests? Er, look elsewhere. Ramble Planet really is a minimalist experience. Somehow, though, the bits of text coupled with the stark visuals make the world come to life. Badmark is just such a weird place, and it gets even weirder when you start picturing the things your character sees. 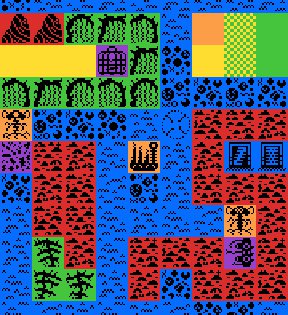 Ramble Planet was created by A. Hagen using OHRRPGCE, the Official Hamster Republic Role Playing Game Creation Engine. This lovely piece of RPG-making software has been around since the late '90s. It has its limits, of course, but that's one of the many draws to the engine. Both the game and the software refuse to change to suit modern players' preferences and moods. Some aspects of gaming never need to be updated.

Ramble Planet's interface is a bit scrunched for mobile phone usage. Serviceable, but you'll constantly be aware of how tiny the interface buttons are if you're playing on anything smaller than a tablet. This isn't a problem for the PC version, as you'll be using the keyboard for everything. The PC download also comes with a PDF manual, just in case you want a little push at the beginning.

Ramble Planet isn't a perfect experience. Sometimes it's a confusing mess of mazes, misinterpreted clues and dead ends. Most of the time, though, it provides the joy of exploration, the old-school thrill of working hard to gain a level, the excitement of finding an item and remembering someone across the map who wanted it, and the opportunity to bring your imagination into a game you're playing.

How do I get to the Windows download please? Both options on the site the button links to seem wrong. I'd put my money on Ouya, but it wouldn't be the first time I registered for something that turned out not to work... :(

D'oh! I must have had my eyes closed. Link turns out to be on the bottom of the page, right above the screen shots, cleverly hidden in plain sight.

The green on green color scheme on the site doesn't help visibility! I wish I could have linked to the download more directly, but hotlinking isn't a groovy thing to do.

I'm playing as a holdbox, and i've interacted with mostly anything, except:

I've managed to collect all 110 experience points, and i'm missing the following parts:

for the "much later alien" if I remember correctly:

use the red device (somewhere south not so far) and transform yourself to another race. There are 3 different alien who speaks only own race, this is one of them.

About the shadow in the desert:

If you're fast you can "get" the shadow and then use the teleporter or the beacon to get back to the bigwisp and get a bonus in the ending.

deactivate the invincible robots. The generator in the southwest only affects one of them!

Also, a bit of a tip for those playing the Windows version: the window resizes to double or triple resolution, which may or may not make it easier on the eyes.

If you want help with the robots:

The second generator is hidden a tiny bit west of the robots in a bush. You have to enter the "hole" in it from the top and use the block under you to find the generator.

Thanks for the help! Of course, now I'm left with the much greater problem of chasing down my missing 2XP, but at least the main objective of the game is complete!

I'm Ramble Planet's creator. Congratulations on getting all the parts! You are one of the few!

If you are anxious to earn those last 2 experience, there is an FAQ on GameFAQs that might help: http://www.gamefaqs.com/ouya/806955-ramble-planet/faqs/69526

By the way, have you done any other games, or are you planning to do more of them?

I've downloaded this game for Android and I'm definitely enjoying it. Its weird atmosphere and interesting descriptions really stimulate imagination! :D
I'm willing to ask a little help though, as i'm stuck with just two parts missing and separating me from the perfect ending. I'm talking about the Alarm and Charger. I have no clue on how to get them!

The hints say that I can find them both in the Desert, respectively by radar and by passing through teleporting arches... but I have no idea what they're talking about!