Remember the good times with Phantom Mansion: Spectrum of Souls? All the puzzles, the cleverness, the colors? If only there was a new game with all that unique wonderful gumption. Maybe with a touch of a few other classic puzzle games, like Reflections or Together Alone: Love in Limbo, that we have a dear love for. What a shame there isn't. Wait, what's that, nonexistent-voice-I'm-making-up? There is? Yes, it's true! Pixelelephant heard our silent cries and delivered their grand game, Rainbow Hero! It's the indie puzzle game we've all been waiting for. 100 levels of tile based puzzles where you must make your way to the open doors to find the colors that were stolen from your lands. Each level is a new trick to figure out and a new way to discover, and a new way to think outside the box. 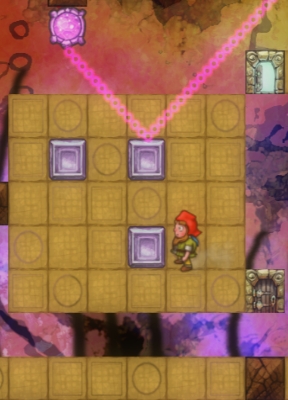 The goal sounds simple enough, but you know with these games it never is. With a hundred levels it may sound as if it could get a little stale and repetitive, but Rainbow Hero is ingenious enough that it never does. Every so many levels it throws in a new twist. It's not just blocks to push, it's balls to roll, lasers to direct, portals to port, and much, much more! And you never seem to use the same solution twice. The developers of this game knew what they were doing. In some puzzle games you'll find the last level had you learn something different to succeed and the next few levels use that exact same lesson you learned to solve it. Not in Rainbow Hero. This game makes you labor hard to get to the answer only to have the next level make you think your new knowledge will make it easier but it actually hinders you. You can get so obsessed with a solution that you can't see the obvious one staring you in the face.

That fact is what makes Rainbow Hero so great. You're always trying something new or looking for the not so obvious, which in some levels it is the obvious. Wrap your brains around that. Or just play the game to figure out what I mean. Rainbow Hero is always giving, however, and doesn't make itself a punishment to play. A handy reverse time button saves the levels that could have been destroyed with one wrong step/push. It saves the frustration for when you're trying to figure out the logical solution. The artwork of the game is also an eye-pleaser though some of the details can be a tad confusing. The doors you enter in are actual "walkable" tiles and not a wall. But the only area this game really falters in is the story line and the only real issue with that is that it's rather simple. It's more like a children's book. You're not going to find any deep meaning here. The sound effects are also a little on the cheesy side, but that's alright. This game is about you and your brain and how to work together. It may be a slight dent out of your wallet but your brain will thank you for it.