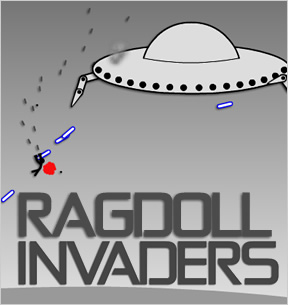 The following is a reader-submitted review by Weirdguy:

Ragdoll Invaders was created by Matteo Guarnieri of Rag Doll Software, a one-man indie developer based in Venice, Italy. He has brought us wonderments like Ragdoll Avalanche, as well as the downloads N-Ball and Ragdoll Masters. Avalanche is basically an endurance test involving large amounts of falling spikes and you. It sounds frustrating, and it is. But now YOU CAN FIGHT BACK!

The main reason why you have guns for arms is because the lasers and explosives are coming from large spaceships which want to take over your planet, but for some reason seem more intent on trying to destroy you first, even though they could easily fly to the other side of the planet and avoid confronting you for months. Although I could understand why they would rather destroy you first: the place seems to be grey and totally featureless, and it would seem less dull risking dying by your full automatic arms than conquering a planet with nothing else on it. Not like it matters to you. You have guns for arms. It makes everything cool.

Of course, why you get such an insane weapon from the start of the game is quickly discovered when you find the downside to being a floppy ragdoll stickman — your lack of control over your limbs causes your arms to flail wildly when you are firing your guns, making it difficult to actually aim while attacking. It isn't really that much of a problem, though, because this also causes you to spread your fire through the entire area, showering everything with death.

Your main objective is to not die from the enthusiastic efforts of your otherworldly assailants, who are more than happy to fire at you with simultaneously reckless and aimed attacks, making your job quite a bit harder than you expected it would be considering that you have dual chainguns for arms. This gets even more crazy when increasing amounts of opponents want to get in on the action at the same time, and eventually you end up having to take on a whole army of them. Good thing you brought both of your guns, eh?

The gameplay might get a bit repetitive for some, but this occurs in most arcade shooters anyway, and the challenge to see how far you can get is the real reason why folks play these games. But it's always nice to see a new take on an old concept. Especially when you have guns for arms.

Hey - am I the only one for whom the link on this game points to Core Cube, and not invaders like it should?

Reload the page and try again. One of the links above had the wrong URL, though it should be fixed now.

Nice review. Good job, Weirdguy! Glad more people are stepping up to help Jay out with the site we've come to love so much. :)

Jay actually fleshed out a bunch of the background info of the game creator and also corrected that link error I made (I think I was messing around with the other games at the time), plus he found a different way to phrase something that I was trying to figure out how to edit but couldn't quite find the right words for it. Thanks for cleaning up those problems I had with the writeup.

It's kinda fun, but the fact that I had to collect the extra lives really killed it for me.

Its a real shame you cant have a bit of leg or arm cut off and still be alive like in the rest of the ragdoll games.

I thought it was just fun charging into the lasers and getting yourself killed.

Fun! I love coordinated shooters. allways gets me hooked for another go. Don't even need a story really ;)
Tricky this one, but got to level 4.
Anyone saved earth yet?

Insanely addictive little game. My best so far is 25 ships; I killed the level 4 boss but he ended up killing me too. Ended with a rank of Ventripotent Agelast.

The momentum component really makes this stand out from other "avoid'em" types - dodging is a lot harder when you can't turn/move instantly, and you really have to be aware of everything on screen that's coming at you to be able to sneak through the gaps. When I was "in the zone", I found my eyes were sort of half-unfocused, staring past the screen to try to keep track of all the projectiles.

I've made it to the level 5 boss, but couldn't quite kill him...

Nice game! Like the smooth physics.
Nick: actually you can get appendages cut off and still live if you get hit right... there was a point when I had both arms cut off and therefore had no guns and had to commit suicide.

The trick is to get a "swinging" rhythm down. You can last a lot longer if you're controlling your movements by dancing around in the air rather than trying to slide back and forth on the ground.

Grr. "Supreme Resistance General" died on the last (7th) boss because my slow computer got jumpy on the screen-shaking deaths of the previous two bosses and cuased me to miss their big life drops. First time, though! (51 kills, that made.)

Fun game, anyways. For me at least, the learning curve of the ragdoll inertia just about matched the difficulty curve of the game, so just as the screen began to fill with ammunition I was dancing between laser blasts with glee.

Am I the only one who found this game to be fairly easy? I finished the game with 19 lives remaining, with the rank of Elastic Tornado.

What I really liked was holding down the spacebar. I always appreciate game designers including stress-injury and fatigue in their products.

Great! I loved pulling off impossible-looking moves where I squeezed in between two bombs while narrowly dodging a decapitating laser, then immediately sidestepped two of those orange impact-balls.

But mostly I got decapitated, dismembered, smacked around, blown to smithereens, etc. etc. Still fun though.

Decent game. Hit detection seemed a bit iffy at times; some shots would go through the legs with no problem and other times the exact same shots would result in death. I wouldn't have minded the difficulty to be higher, since it only took one play to get that score, although down the stretch it was a bit challenging.

Nice game. I think ragdoll avalanche was a set up for this game. Got to 7th boss, but he killed me. Got 51 ships and rank "Earth Defender", I think the key to this game is to get the boss hearts, even if that means jumping in front on the next wave of fire. I like how the boss keeps making itself stronger. The death-ray-thing was a nice touch.

Worst Rank: Global Warming Advocate.
If someone gave me ranks from worst to best, post a comment.

Bad Url! 404 Error. Must have moved their game. That's OK, I know the guys at JIG will be right on it!

WHAT IS THIS MUSIC I LOVE IT!

My nine year old son just reached level 7 "Tech Viking" after killing 51 ships, the Mother ship killed him. It is amazing to watch him play this cool game. Last time he played (long time ago... he goes through phases of interest) his high level was some kind of "necromancer," and he got to come back to life once after dying without extra lives stored. :) I'd love to see a list of the possible titles but haven't been able to find it. This is a creative and thoroughly delightful developmental toy. I only wish *I* had the skills to play it. Thanks, Jay!

havent played this in ages and forgot how good it was.....31 ships- smooth criminal

My God! The Mothership becomes a Death Machine after five or six levels!