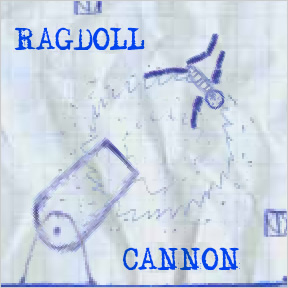 Cannons have a unique place in human history. Throughout the ages, they have served as an offensive weapon to knock down fortifications, an accentuation in pieces of classical music, and a rudimentary yet entertaining transport for clowns. Continuing in this rich tradition, let's launch stickmen at bricks to dignified tunes!

Ragdoll Cannon, the latest effort from Johnny_K (Poiser, Domino-P), places you in command of semi-automatic artillery ripped straight out of the center ring. Use your mouse to choose the right angle and just enough force to hit the "HERE!" pad.

Through your stick-slinging adventures, you'll encounter obstacles that stand in your way. Sometimes you'll have to spend a stickman to clear an object out of your way, or set up a chain reaction. You can have up to five stickmen on your screen at once, and each shot earns one point. The game's golf-style scoring values low scores, so only masters of mortars will rack up a perfect score of 21 points over 20 levels.

Analysis: Ragdoll Cannon is a charming projectile game created in JohnnyK's signature blueprint style familiar to fans of his other work. The game itself feels polished, with the physics consistent and reasonable. The music seems like a nice touch at first, but can subtly grab your nerve endings and drag them along a cheese grater; thankfully, it can be disabled, but the button rather strangely fires a stickman when pressed. It seems like something that should've been caught before production, but it won't impact your score, thanks to the "reset level" button (which, incidentally, you will make heavy usage of if you're shooting for a perfect score).

The usage of stickmen as cannon fodder leads to some interesting problems and equally interesting solutions; whilst on one level, it may spin the wrong way and block the path to victory, another level may hinge upon impaling it along a platform and sliding it to victory. Adding to potential frustration is the occasional pixelhunt to find just the right range of values that will work. But once you get going in this Howitzer hoedown, you'll have trouble extinguishing your fuse.

The option to restart the stage seems to negate the meaning of keeping score. While I suppose it would make more sense for me to just keep blasting until I get it right, I feel like I just have to restart the stage to get the lowest score. Perhaps that's more my problem than the designer's.

Besides that, it's interesting.

Paul, I think the level restart is more because there is at least one level where you can mess up so badly that there's no chance of getting to the goal.

Nevermind, I got it :) But case in point, that is one level where you may have a legitimate need to restart.

Fun, and most levels weren't too bad to get through. Good for a quick break!

I'm having trouble with level 12. Is there a strategy to be used other than the obvious, or am I just lacking in precision?

Ok, level 12 is just plain stupid. Really the physics kind of sucks actually, the little men get stuck on stuff after falling right through things and the sliding aspect of the physics is unrealistic. I like physics games, but this one gets a big thumbs down from me.

I liked this game a lot when I first saw it a couple of weeks ago and glad to see it here.

The premise of this game reminds me of the first Hapland game, where you have to fire your stickmen from a cannon. The danger of impalement also seems to be familiar from there... :-)

I'm also having a massive amount of trouble on level 12. It's just not WORKING!

This looks very similar to that Domino game reviewed not too long ago. Is this an engine that freely available or something?

...or I could read the review and find out.

There are a couple of ways to do this. The first one is done in 2 moves - first you shoot so that ragdoll crashes into the far right of the screen, tumbling down the bumpy slope-ish thing, and landing on the bottom part of the line thing. Then shoot the 10TON weight. It'll crash down, catapulting the other ragdoll up at the HERE block.
-----
Ways to do it in just one shot:
1.Shoot the 10TON boulder so that the ragdoll just skims it, but enough to cause it to roll. The ragdoll, however, will continue on and blast to the other side of the screen, tumble down, and if you timed and aimed it right, should land on the lever thing and be catapulted up by the weight.
2.Shoot so that the ragdoll goes up, just skimming the boulder, and falls down on top of it. The combined weight of the falling boulder and the ragdoll should push the line up higher, hitting the HERE block, and causing it to fall down on top of the ragdoll. Or, if you miss, the ragdoll will bounce against the boulder, onto the ramp, and down. The boulder will fall, hit, catapult, win. Yay!

Any hints on getting Level 20 in one shot?

Fun Stuff! My favorite of the Johnny_K games so far.

Except for level two, it appears from the scoreboard that the rest can be done in one shot (even the additional 5). That should keep people coming back to beat their personal best.

I am totally stymied by level 10. Although whereas with some games you get frustrated and can't do anything, in this one at least you can let off a little steam blasting dolls out a cannon...

1: Music should be mutable without muting the sound effects as well.
2. Rag dolls should not be able to get stuck on things due to a separation in their joints!

Level 10 has me completely flummoxed as well.

Nevermind, got it, but man that was terrible.

I wouldn't go for the 5 extra levels, they don't seem fun and the site they're on is... scuzzy.

did 20 levels in 30 shots
the lowest possible score is 21 without hacking.
if anyone gets to level 20 remember the code so you dont have to re do all of the levels to play the extra 5

how do you get lvl 5? there is no way i can get through that tiny hole.

Once again, this game has a bad physics engine that needs to be addressed, but since there have been three games released with this engine, I don't see it changing any time soon.

What this game could use is a scroll feature. Maybe holding "S" would allow the mouse to move the camera when it gets near an edge, but when "S" is released, it moves the camera back to where it was when the level started (smoothly, of course). At the same time, whenever "S" is held, shooting should be disabled.

By the way, a clearer explanation of how to do level 12:

Try to put the guy closer to the middle of the see-saw rather than the end. But if you put him too close to the middle, he won't go high enough. Wanna know how I did it?

When I did it, I remember placing the crosshairs on the top dot of the colon (":") for the level name, then firing. I may have put two guys on the see-saw, I don't remember. If I did, I didn't move the crosshairs even a little bit when I placed the second guy. After that, I simply hit the ball.

I was quite unhappy that without asking they have posted the "peter played ragdoll canon" on Facebook. hmmmmm

Any ideas for level 24? I've been trying for a while now to figure out a way to get his arm to smack the box by spinning him off the ledge, it's just not working.

When i finished this i thought 103 was good....then i looked at the high scores.
Either way i think it's an excellent game and i'm lovin those ragdoll physics.

Fire the cannon up and to the right, but just left of the horizontal line across the top of the screen. Apparently there's a diagonal vertical line that is above the ceiling that will deflect the ragdoll back to the left, and land him on the goal. AFAIK the rest of the level has a ceiling, just this one spot doesn't. This is doable in one shot, but good luck finding the sweet spot.

Shoot the doll up into the 10t ball to start it rolling, but he needs to come down on the side of the block that's teetering next to the cannon, allowing him to fall inside the wall. The ball will make it's way (slowly) down the ramps and then knock the goal off it's perch, and into the ragdoll that is now laying on the floor.

For those struggling with level 20 I've made a screenshot of the ideal cursor position just press fire twice and you are done.

How the heck do you get to the extra 5 levels after you've beaten it?!

I am stuck on Level 14. What should I do here? I already tried making fall down all the blocks.. That didn't help. Perhaps I am a bit sutpid, but I see no HERE block.

I'm at level 41 and it's really hard. Everything looks like it's made of bone or toilet paper and this shot is getting to me.

One Swiss guy completed the game in 4 shots.

Keep smacking into the smiley-faced boulder until the "here" block gets knocked over the top, then, you can get a shot at it on the way down.

Great game but stuck at level 14

Chuck Norris can do it all in one shot...

I don't have any idea how to beat level 120. There are invisible walls and I don't know where should I shoot to pass it.

6,208 Views
5 Comments
chrpa— Jayisgames needs your help to continue providing quality content. Click for details This is the fourth installment of Rinnogogo's Holy Night series (links to previous games you find below) and it is again lovely and delicate game with an...  ...

5,024 Views
0 Comments
chrpa— Jayisgames needs your help to continue providing quality content. Click for details Welcome to Weekday Puzzle! We start with Babarageo's cute rabbit in a role of Pacman who tries to eat his way through a maze and get to...  ...