When Francis Bacon famously said that knowledge is power, he probably didn't mean that knowing trivia answers would grant you magic powers. But that's how things work in Quiz RPG: World of Mystic Wiz, a trivia game for Android similar to Puzzle and Dragons that blends elements of roleplaying and card games. You play as a brand new magician who's taking an apprenticeship under one of the world's best wizards. She may be eccentric, but Wiz gets the job done, and she's taken a liking to you.

The basic game mechanic is simple: you have five cards, each one representing one of the spirits that make magic work. Each spirit — both the ones you control and the ones you fight against — has an element attached to it. 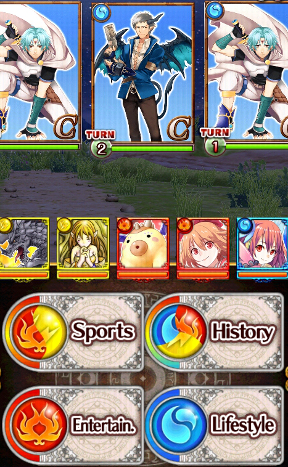 (In the game of elemental rock-paper-scissors, Thunder beats Water beats Fire beats Thunder.) In order to make your spirits attack, you need to answer trivia questions. A correct answer means all the cards of the same element as the question will attack. Answer quickly enough, or answer enough questions correctly, and you can activate your spirits' special abilities. These abilities let you do damage to all opponents without using a turn, or heal yourself, or do extra damage, or any number of other things. As you advance in the game, you can combine cards to improve them: something you'll definitely need when the enemies get tough.

The universe of Mystic Wiz is a deep one, full of quests and interesting characters and an overarching mystery for your character to solve. There's even a tournament where you can compete against other players for prestige and prizes. Just as there's an element of strategy to choosing your cards, there's a strategy to choosing your questions. Do you choose the category that you know well, and do less damage? Or do you pick the one you're weakest in that can do the most damage? There's quite a variety of questions as well: some are very easy and some are very hard, but most fall in between. With over 15,000 questions in the pool, there's enough trivia to last even the most hardcore of us quite a while.

The English version of the game isn't without its flaws, though: the notifications are still in Japanese, and some of the sorting questions lack a scale. (Do I sort the temperatures from high to low, or low to high? Do I start with the oldest, or the newest?) Neither of these are game-breakers, however, as the notifications aren't essential to gameplay and the sorting questions don't harm you if you get them wrong. The rest of the game is absolutely solid, and really quite addictive. Also there's a talking cat who mews if you poke her, so that alone makes it worth a look.

So far, the game's been fun. I'm weak on sports and entertainment, but the other categories have been fair.

I was reluctant to post a referral code, seeing as how the battle cats forum turned out, but I wish I had entered one when starting the game. Using one gives you enough crystals to roll for one extra rare card, a big difference in the first couple towns.

This is a very unique way of playin a turn-based card game, great design on the interface and graphics are definitely easy on the eye. The trivia is fun and adds a special element to the game. For anyone planning to play, hit me up using this invite code and get additional bonuses when you start: GAD6H8KN

this game is fun , if you want a bonus tape 5HSAZFEV

The game is great and although there have been a bit more on the American questions for history/entertainment, overall it is a great game still.
The art is pretty good and it has an oddly animated cat that you can poke to make it meow.
Main problem would be that you need a decent internet connection so sometime you might get the -50000 error until a better internet connection has been established.
If you enter the code 79NFG8UY upon entering, you can receive a rank A spirit that should help you out on your journey.

Use this code to begin the
game after earning a bonus!
Invite Code: 85LHPW83