When the kingdom is at war, it's a dangerous time to be a fresh-faced young man newly recruited into the king's army, and it's even worse if you're a young woman desperately trying to keep the fact that she is not, in fact, a man secret. In Aqualuft Games' indie visual novel RPG adventure Queen at Arms, you're Marcus, whose name is changeable, and you've just signed up with the army in a desperate bid to find your brother and after the death of your father. A father, who, it must be said, is not your parent by birth, and who warned you to keep your real identity a secret at all times, lest "everyone you care about be in great danger". Hmmm, is that a plot twist I smell? But even when Marcus is reunited with her brother Nicholas early on, things get harder, if anything. Nick seems like an entirely different person, even simple tasks become a challenge when Marcus needs to hide her physical gender, the locals at the army camp are downright hostile to soldiers, intrigue and politics make the war far more complicated than Marcus had first imagined, and no matter what she does she seems to wind up sticking out one way or another. When the war takes an even more serious turn, can Marcus keep her identity a secret, even to the people she's fighting alongside? What will she do when she suddenly finds herself burdened with heavy responsibility? With over ten hours of play time, multiple endings, four chapters, and five romance options, Queen at Arms is one seriously meaty adventure where every choice you make, big or small, has an impact on the way things play out. By turns hilarious, intense, and touching, Queen at Arms is an epic tale with a gripping cast of characters that is definitely worth a try despite spreading itself too thin in some areas. 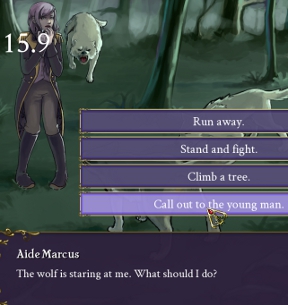 To play, just click to select the choice you like when some are presented to you, but be warned... at times you'll need to decide fast when Marcus is in trouble. There are, in fact, many battles and otherwise tense scenes where you'll have to puzzle your way out of danger, with multiple decisions coming on the heels of one another. Right-clicking opens a menu for you to save and load your game, and the mouse scroll wheel will allow you to backtrack through dialogue a certain amount. Unlike some visual novels, Queen at Arms is packed full of choices, large and small, so you're kept engaged and feeling as if your choices are driving the whole story throughout. While there are some points where the game has Marcus make a questionable decision on her own simply to drive the story (or the drama), those are mercifully few and far between. You really feel like every decision you make has some impact on your experience, and as such, you'll want to replay to see the way things play out differently in every situation. There's a complex battle in the third act that requires a lot of thought and choices to pull off with minimal loss of life. Just make sure to save frequently and in different slots, as some choices can lock you into unwinnable situations that result in your death. 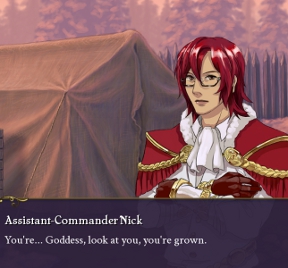 While one of the selling points the game uses to advertise itself is dealing with gender and diverse sexuality, however, it feels like it's spread itself a little thin. It touches on things like gender norms and sexuality, to be sure, and that's important, but it doesn't always explore them to the extent that some players might prefer. You are given some chances to explore how Marcus might feel about her predicament, such as whether she's hiding her sex out of a promise to her father or because she really does feel more comfortable as a man, but not every romantic route affords the same opportunities. To get a truly satisfying romantic arc, you need to be aggressive in spending all your time with the character of your choosing, but not every choice leads to an obvious character. To be perfectly frank, the big "plot twist" in chapter three isn't much of a twist at all, given how aggressively it's foreshadowed, and, well... the title. Speaking of chapter three, apart from the very last of it, it feels like it's the weakest one in the game simply because of how much drama feels like it's there simply for drama's sake. No matter how well you do at one specific challenge, for instance, you're still told you lost 40% of your forces, which has the result of making the encounter feel pointlessly dramatic instead of powerfully affecting. Queen at Arms is an aggressively ambitious game, and can be remarkably engrossing at times, but it's juggling a lot of threads, and maybe some them could or should have been taken out of the equation to better develop the rest. Queen at Arms has an expanded edition coming later this year, however, that, for an additional fee, will add on more scenes and an another romance, so time will tell if it develops the weaker areas further. 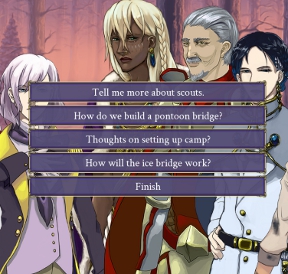 While Marcus eventually gets to come into her character more as the game goes on and she's required to act instead of just observe, she initially comes across as frustratingly passive, aided by the fact that she often doesn't speak and just tends to nod in response. To everything. "I nod." "I nodded." Or, for variety, "I shook my head". Over and over. Marcus is supposed to by shy and hesitant to speak to give away her sex, granted, so thankfully the more confident Marcus becomes, the more open and outspoken she becomes as well. While her silence and timidity grates in the beginning, Marcus quickly grows into a downright impressive leader almost in spite of herself... someone willing to stand up and do what must be done for the sake of others without question, and who can inspire loyalty and action in those around her. Your decisions have real weight to them, and characters grow and change significantly as the story progresses. Likewise, the narrative deals with the way war can dehumanize people to one another, the way there are few real "villains" in any conflict, and not every decision you make is obviously "right". In fact, more than once the game makes you question what you've done or said by offering a barrage of multiple choices... do you stick to your guns? Or do you second-guess your methods and take a different tactic? The times when you're forced to figure out how to deal with the situations that arise in your army with your soldiers and the trials they face are the game's strongest. 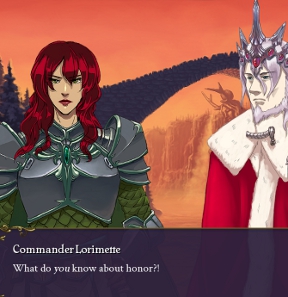 Surprisingly, Queen at Arms' final chapter does a lot to tie together virtually all of the plot threads left dangling in the third act, though it is substantially shorter, and figuring out how to get the ending you want is hard considering how long and involved the rest of the game is. The game is extremely light on CGs, and there are a lot of scenes where they might have made certain plot points all the more powerful, and the same sprites being used over and over for multiple named "background" soldiers (sometimes on the same screen) gets a little confusing, though many of the backgrounds are gorgeous and atmospheric. Though it struggles with pacing, however, Queen at Arms is a game with a rich narrative and complex characters, and a long game besides... the demo comprises the entire first chapter, making it more than enough time to decide if you want more. If you want a meaty visual novel that'll give you cause to come back to it again and again, Queen at Arms should be at the top of your list, and we can only hope we see much more from its talented team in the future.