Quantum Spectre by EdGE and GameGurus, is a puzzle game about keeping dangerous space boogers in check. Well, not literally, but basically. The concept is that you work aboard a station where "space spectres" (is that like GhostFacers?) are about to break free of their containment fields, which is bad for some reason, so you must place a series of mirrors and other reflective objects down on a field to direct a laser to power the containment field in a limited number of moves. If you complete a level in more than the amount of moves allowed, spectres will begin to escape and... do stuff? Everything you do, from dragging mirrors around to rotating them, costs you a move, so make sure you plan things out in advance, since the lack of an undo button means you have to restart the entire level if you make a mistake. 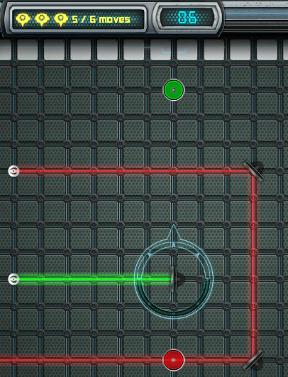 Eventually, you'll need to contend with making sure specific colours are routed to appropriate nodes, or making sure certain nodes are powered by multiple colours, or even blending lasers to get a specific colour of out them. Throw in some other objects like double-sided mirrors and the difficulty ramps up nicely... if somewhat unevenly, with what feels like a very long, gentle slope of levels players might find far too easy. It's designed to be an educational game, which is great, though some minor annoyances like the lack of colour-blind friendly options, the absent undo button, and how ludicrously tiny the light that indicates what colour laser a node is projecting is (which makes separating mixed colours a little more difficult than it needed to be whenever you encounter it ), means the game isn't quite as user-friendly as it possibly could be. For a lot of players, the premise is going to be too familiar, and the perhaps disproportionately flashy opening cutscene and spectre visuals won't be enough to really elevate it. Still, the levels are crafted with care, and the slow inclusion of new elements makes this a solid, beautifully presented little puzzle to cut your teeth on... and now you get to add "spectre containment specialist" to your resume to boot.

Thought there were only 30 levels. So I just decided to finish the game.
Then it turns out that was just zone 1 out of 9. O_o
I'm really curious on what other mechanics would appear later, but the game isn't interesting enough to keep playing.

This one feels SO close. Along with a few other interface nits, it really does need an undo button if it's going to count moves, and the difficulty could definitely stand to ramp up faster. (Though I guess it's aimed at least partially at kids, so okay.) Right now it mostly makes me want to revisit the Aargon games, which play like well-oiled machines and are still the gold standard in this genre IMO. But with so many free levels (270? 180 with more to come?) I'll stick with it for a while and see how it goes.

I'm about 65 levels in, and I agree wholeheartedly with abfdrumz's comment. There are times where you're just one space (or angle) off, and having to redo the whole setup to get back to that point is a pain.

As far as the difficulty, they introduce additional elements that keep it interesting (up till now, at least); my only criticism is that there's not much of a visible difference between different degrees of convex and concave mirrors, and it's difficult to easily see which are which (you have to look very closely at the black vs silver or gray parts on the two kinds of mirrors to tell the difference).

Use one lens and one mirror per beam.

The blue beam passes through the more convex lens.

The green beam needs to pass through its lens twice...good thing you've got that mirror.

What happens if you hit the curved mirrors in the center?

They function just like flat mirrors, if you have them angled 45 degrees to the side.

Go at the red and green ones straight from the top, and hit the blue from a straight 45

Use the double-sided mirror two dots directly above the red laser origin (red laser origin, empty dot, center of mirror), ends pointing up, then use the middle of the others at 45's on the center line from the origins, pointing down at the targets.

@CrankYanker: Thanks, got it! Though it looks like that's a 6-move solution, so I

bent the red beam diagonally instead to do it in 5.

The different mirror types are a red herring: all beams bend 90 degrees.

The solution is symmetrical.

The beam splitters go in the center.

This game appears to be getting its revenge on me for saying that it could ramp up the difficulty faster (which may still be true, but it does get there).

Anyone got any ideas on zone 4 level 13? I know it's gonna seem really obvious later, but I just can't see a way to do atm.

Stopped after level 6-28, partly because when I place a 'parting' square directly above a place between to solid blocks it just turns 90dg. and adds extra turn.

Blue does just what you'd expect, using a single mirror.

Red and green each seem to need three mirrors, but you've only got three more total. So....

Use the three mirrors to create a diagonal box that combines red and green to make yellow.