Quantum Corps is a fast-and-furious run-and-gun retro platformer by HypnoHustler. In the post-apocalyptic future of 2002, Neo-Detroit is facing a terrible crisis. Ruffians across the fair city have packed themselves into the abandoned factory district, churning out barrels of the new designer drug du jour, "Illegal Substance". Seeing the police helpless, the government forms a new strike team to combat the menace. Gifted with powers over time and gravity, these super-soldiers are all that stands between the gangs and their total domination of the city. You are one of them, a member of the Quantum Corps! 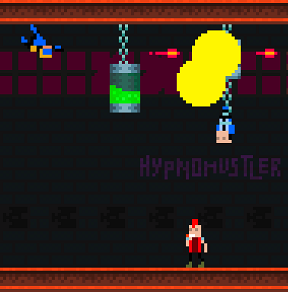 After level selection, your corp member will charge in guns-ablazing with the [X] key. He's weighted down with his heavy lasers, but [C] will reverse gravity, allowing him to clear those inconvenient bottomless pits. Also, if the action gets too furious, you can slow down time by holding [Z] (though doing so deactivates all bonus stars in a level). Blast bad guys and their equipment, while collecting stars and hostages and dodging bombs and missile firing laser grids. Occasionally, you'll come upon a Corp Clone, who, when collected, will join your pursuit, mirroring your movements and gunfire. Complete all 30 levels and you'll show them that winners truly don't use drugs!

Quantum Corps is definitely a game for those who thought Canabalt and VVVVV had nowhere nearly enough guns or exploding vats. It wears its faux-80s aesthetic well. and the addition of the time-slowing mechanic helps mollify the sharp learning curve typical of the genre. (It must be from all the quantum!) The mechanics it's based around are a little simple, but all in all, Quantum Corps will keep shooter fans gleefully speed-running... and slow-running, too!