Quantum Conundrum is a light-hearted puzzle adventure game from Airtight Games. Taking pages from releases like Q.U.B.E. and, of course, Portal, Quantum Conundrum pits you against a series of challenges that require some fine manipulation of physics in order to solve. In this case, you have the dubious honor of being able to switch between four unique dimensions that affect everything in the game in a different way. Work your way through your uncle's mansion as you help him attempt to solve the riddle of where exactly he's gotten himself lost this time! 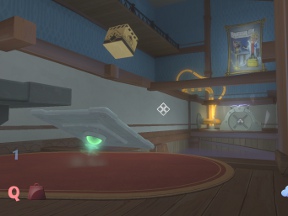 Just as you arrive to see your dear old uncle professor Fitz Quadwrangle, the crazy inventor disappears and is lost in some strange pocket of a dimension elsewhere in the mansion. He can still communicate with you (through the voice of the inimitable John de Lancie), but as far as offering you tea and scones, he's going to have a rough time. So, donning a special Inter-Dimensional Shift glove, you learn how to control the very fabric of space-time with the press of a few buttons. This could be a more entertaining visit than you had originally hoped!

Quantum Conundrum controls like most games of its nature, allowing you to look around freely with the mouse, move with the [WASD] keys, and jump with [spacebar]. You can pick up and manipulate a number of smaller objects with a [left] click, a skill you'll soon put to use as you weigh switches down with crates, flip buttons, activate cloning mechanisms, and so on. 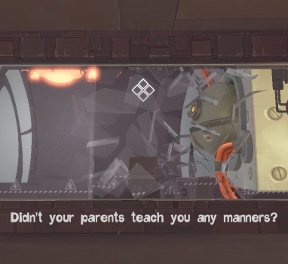 Now for the good stuff: dimensional warping. By powering devices throughout the mansion, you can activate your IDS device so it can toggle between dimensions on the fly. It starts out with the fluffy dimension, an ability that, when active, makes everything as light as a cloud. This allows you to carry things like safes with the greatest of ease. Later, you get to use the heavy dimension, turning nigh-weightless objects into immovable blocks. Then there's the slow and reverse gravity abilities, which you probably understand just by reading their names. By switching between these dimensions, you can solve the game's various puzzles as you work your way through the mansion, listening to your uncle's ramblings the entire time.

Analysis: Like a Saturday morning cartoon (if you're old enough to remember those), Quantum Conundrum is bright, quirky, friendly and easy to understand. You can hop in and start succeeding almost without effort, and the puzzles later in the game are more an exercise in persistence than raw logical deduction. The dimensional shifts are executed flawlessly, and it's something of a surreal experience to press a button and make everything around you dense and indestructible or slow down to a crawl. There are also a number of collectibles and funny narrative moments, giving you even more reason to keep plugging away, stage after stage. 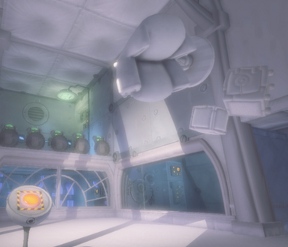 It's worth noting that one of the lead designers on Quantum Conundrum, Kim Swift, is partially responsible for both the first Portal as well as Narbacular Drop, the "original" Portal project whose team was hired by Valve to work on the first game. It's very easy to see the design similarities between the two games, though the physics by which puzzles are solved are completely different. Plus, you're not trapped in a testing facility with a mentally unsound computer intelligence taunting you at every turn, so things always look a bit brighter.

Quantum Conundrum does fall flat in a few areas, one of them being the flavors of the different dimensions you can activate. Video games have been around for several decades now, and sometimes we players feel like we've seen just about every gimmick in the book. Until something like Portal comes along to twist things in a delicious knot. Quantum Conundrum, however, chooses to utilize very well-worked gameplay alterations instead of shoot for something unique, so instead of mucking about with portals or peanut butter trousers (there's a free idea for you, game designers!), you get to make things heavy or light. Great. Sounds exciting. To be fair, it is sort of exciting, but when you strip it down to its bare bones, it's all the same stuff we've seen before, wrapped in a prettier package.

Although it may not be as original as the games it emulates, Quantum Conundrum is an enjoyable experience that balances its difficulty between a casual learning curve and time-tested gameplay gimmicks. The atmosphere is lighter and easier than most first person puzzle games, and even though there's only five or six hours of playtime to be had, new content is planned for future updates, so the game will do nothing but get better as time goes by.

Windows:
Download the demo (via Steam) Get the full version (via Steam)

Quantum Conundrum's quite a good game, but as some have commented (and complained) on, it does end up at least as much of a action platforming game as a puzzle game by the end. Not a *bad* thing (especially if you like the timing and reflex-requiring puzzles of Portal 1 over the style used in 2). The only part I had much complaint about was that the ending was very flat and far too blatantly a lead-in to the DLC--and pretty lousy as an ending for the game by itself.