Quad Cop is... a weird game. It's a physics puzzle where you play a square sheriff wrangling square baddies by trying to knock them off the screen, while also collecting all three stars on every level because a physics game without collecting stars these days summons the physics police. That's not the weird part. The weird part is that on each level you have a limited amount of food to feed to your cop, which affects him in different ways. Tacos make you burp, peas (beans?) make you fart and temporarily fly, and chilies make you let out a burst of heat. Just click one of the food items in the upper left corner, then click on a sheriff to feed the food to him. All of this impacts you and your surroundings in various ways, so for example, feeding a taco to a sheriff on an incline could mean the resulting fart gives him enough momentum to go sliding down and good grief is that actually a line I just typed? Is that even a taco? It could be a bánh mì. I don't know what's happening anymore. 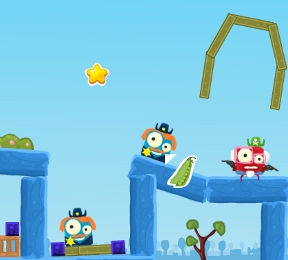 Like most physics puzzles, completing a level's basic objective, in this case knocking the bad guy into the abyss, is usually easily accomplished, while doing so and collecting those ubiquitous stars takes a bit more thought and timing. Quad Cop doesn't really shake up this established genre formula even with its bodily-functions-centric mechanics, but its goofy style and goofier premise give it its own special charm. It doesn't really begin to engage until the levels become more elaborate, throwing in switches, pulleys, wheels, and so forth, and it still would have been nice to see a few more foods tossed in to keep you hooked. As it stands, Quad Cop may be simple, but its well made, and with just the right amount of challenge, will fit nicely in a break-sized slot of time no matter what your age or skill level.

Cute enough, I suppose, but a little simple and sophomoric. Also, the delay in the effects make timing a bit frustrating, but maybe that's the point. I found an interesting bug in the level select menu: I collected the third star in level 8 AFTER the level end animation had begun. Later, I noticed in the menu that only 2 stars were highlighted on that level -- all other levels through 17 were 3-starred -- so I went back and re-played it. Back on the menu, level 8 was now 3-starred, but 9 was only 2! Re-playing 9 moved the "missing" star to 10, and playing 10 to 11. At this point, I gave up caring about it, but then noticed that level 18 was 3-starred, even though I had not yet played it. Weird.

It's cute but the physics are messy. They seem a bit inconsistent and there are effects that don't make sense, like why does my little quad cop get pushed off the moving platform on 17? And the timing on the effects v the moving parts of the stages is infuriatingly tight. It's an alright game but I'll wait for Quad Cop 2 (Octo Cop?)

Yeah, there's something really strange when you go back to previous levels... I'm experiencing the same thing. Stars moving around, getting 3 stars on levels I haven't played yet...

Had problems finding the exact spot for feeding the sheriff, and I guess one had had enough food by level 10 'cause he wouldn't eat anymore, so had to quit.