What a world we live in, where mankind can walk on the moon, salad can be purchased in cups, and falling block puzzles can be fused with word games. If you're ready for your brain to have a little run through the multitasking wringer, Puzzlejuice is without a doubt the best way to hurt your synapses. With a little Tetris-like block arranging and a little Spelltower-style word building, you, too, can drive yourself mad with delight! 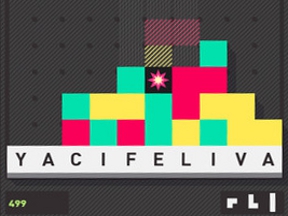 For the most part, Puzzlejuice operates like a game of Tetris, where blocks fall from the sky and you can rotate/slide them to place them where you want on the ground. Colors come into play, though, so in addition to filling horizontal rows, you'll also want to make an attempt to keep like colors together. When three or more blocks are touching, tap them to make a match. But wait! Matched blocks and complete horizontal rows don't disappear. Instead, they turn into letter tiles. And then things get crazy.

After dealing with falling blocks, your job is only half over. Letter tiles can be used to spell words, the larger the more deadly. Tap and drag to create a word, moving in any direction as long as the tiles are touching. When you spell a word, the tiles vanish (or, explode in a "wordsplosion"), and depending on which mode you're playing, surrounding tiles of any type could be eliminated as well. Not only do you have to watch the constantly-falling blocks from above and arrange them where you like, you also have to switch your brain to spelling mode so you can actually make those tiles disappear. Eep.

Puzzlejuice comes with two main modes of play: core mode, as described above (which features a few sub-modes), and zen mode, which follows the same basic rules but is limited to 90 second rounds where blocks do not descend on their own. Throw into the already thick soup mix a series of objectives similar to those found in Jetpack Joyride, add in achievements, drop in a few power-ups, then stir in a cup or two of "gotta beat my own score because I'm totally better than that lame-o score that's there right now", and you've got the makings of an incredibly attractive puzzle game. 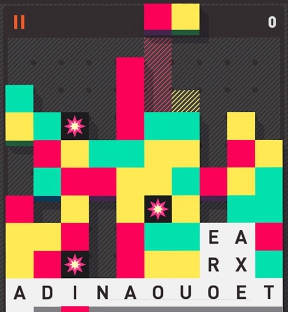 Analysis: Puzzlejuice is crazy in a box. The game has an in-your-face style of humor that only adds to the nigh-arcade feeling. There's attitude and wit, speed and intense rounds, all coupled with incredibly cerebral moments where you walk a fine line between wordsmith and speed puzzle master. This is one of those games that pulls you in right away with its presentation, and as soon as you get the hang of it, you'll keep going because it's such an awesome feeling to succeed at.

Because of the strong puzzle/arcade hybrid, you don't have to be a falling block aficionado to enjoy Puzzlejuice. In fact, it's quite suitable for all sorts of players, from speed-loving action gamers to that aunt of yours who always smells like burnt onions. It's perfectly enjoyable in short bursts but also great for longer sessions, depending on how high your tolerance for being driven mad happens to be.

There's just one area where Puzzlejuice can trip over its own multitasking: the controls. Everything is touch/slide based, and you use pretty much the same moves to spell words, rotate blocks, and drop pieces to the ground. Because of this, you'll sometimes find yourself spelling words when you wanted to move a block, or rotating when you meant to drop. It's a function of dividing your attention, since you can't possibly keep your eyes everywhere at the same time. The controls never really get in your way, thankfully, but keep this in mind when you first start playing.

Puzzlejuice has that magic formula that will drag you in and never let go. It's the sort of game that's almost psychotic in nature, but bringing order to that fast chaos is supremely satisfying once you can wrangle falling blocks and spelling words at the same time!

I picked up this title a day or so and have been expecting this article ever since.

Aside from a few of the control hiccups (like the control overlap mentioned in the article, and the finicky nature of the drag-to-select-letters scheme) and a few bugs (I've noticed a few relating to power-ups not triggering when lines are completed, among others), this game just delivers everything you would want from it. There are also a few crashing issues, but I think my hope for a stability patch is reasonable.

The previously mentioned 'casual infrastructure' of objectives, power-ups, and different modes for different folks are supplemented by positive reinforcement for progress in those achievements and satisfying power-up visuals to create visceral enjoyment from their use. Even the swanky soundtrack contributes to the incredible experience this incredibly compact package delivers.

One tip: Don't feel compelled to obey the rules of any single game that Puzzlejuice draws on. The objectives are eventually going to require a great deal of creative thinking. Don't be afraid to take things slow, especially if you're an old Tetris pro. I'm still only halfway with these achievements, and for once my girlfriend is ahead of me.

Pick up Puzzlejuice today! Best dollar I've spent in a good while.

As with ChaoSpectre:
I've browsing through the App Store one fine sunny day...
When a app glimmered through my eyes, they say...
Its name was Puzzlejuice, can't you see?
It's not so simple, take it from me!

Actually, I was browsing the App Store 3 days ago, found this, loved it, and love that it gets its own review! Multitasking is second nature to me. I've beat my friend in a bet saying I can't concentrate on 7 plus 4 things at once. Then the game begin. I was multitasking! I don't want to tell you what I was doing, I was timesharing between 11 things, it was crazy, my talk was high-pitched, stuff like that.

Puzzlejuice is no challenge to me. As a (almost!) walking CSW (Collin's Scrabble Words, official word list for international Scrabble), the words part is easy, as I perplex the letter tiles with my 8-letter words. (The most I've done in the game is 9 letters, can anyone beat me?)

TL;DR: Get Puzzlejuice. That is all.