Puzzle to the Center of the Earth

If you're a master of hell runs in Spelunky and you're getting tired of eggplant for supper every night, you might be looking for a new challenge to shake up your straight-down trips. In Puzzle to the Center of the Earth, available free for iOS and Android, that challenge comes in the form of a match-3 puzzle. The colored blocks you break apart also form the platforms you have to have to traverse in this clever mashup by Foursaken Media. It's a long way down, so watch where you swing your pickaxe! 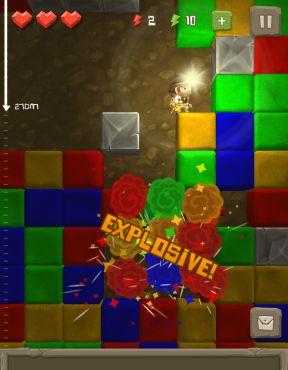 Using your digging machine on the surface of the earth, you can break up clusters of three or more matching blocks by dragging a path through them. However, your machine has a limited power supply; you can recharge your supply by collecting green energy gems, which can be found in some blocks. Connecting a string of six or more blocks also creates a red charge, which can be used to connect a certain pattern of blocks, enabling special abilities (for example, blue-red-green triggers a powerful explosion, while yellow-cyan-red creates energy crystals from normal blocks). When all else fails, you can also swipe down on a single block to make it drop, but note that this costs one of your energy crystals.

Once you have a path made or find some loot to grab, you can start to travel through it by swiping (and holding) to the left or right in the grey box at the bottom. With a small upward flick, you can jump and climb as you move, which is essential for platforming your way around the terrain. Your goal in each level is to dig (and traverse through) to the bottom, but the path isn't always straightforward. Grey blocks are impenetrable, meaning you might have to sift through a bit of a maze to pass. For completionists, there are also stars hidden in each level, as well as a switch that activates a secret door in one level per cluster of ten. You'll often have to peek into every crevice to find them (the map in the pause screen is your friend here), and sometimes climb back up to reach points above, so how you carve out your path is very important to your success.

As if digging a big hole with a limited power supply wasn't hard enough, you're also made of flesh and bones, and painful things tend to hurt you. Standing too close to explosions, being attacked by enemies, and falling long distances can knock a portion of your health off. When you lose your three hearts, you fail the level and lose a life (more on that later). Items to aid your journey are purchasable within the game, and occasionally found in chests scattered through the game. 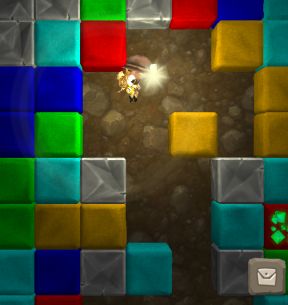 Analysis: Though Puzzle to the Center of the Earth and Spelunky have very different takes on the platforming genre (Spelunky focuses on fast action, this focuses on processed strategy), both offer similar challenges with comparable levels of difficulty. While Spelunky has completely randomly-generated levels, Puzzle to the Center's levels have preset basic structures and item locations, with random colored blocks to fill in the rest of the space. If you fail a level, you can restart it and remember the general layout and how you navigated it before. On one hand, this takes away a shade of the replayability of the game (though there are dozens of levels to keep you occupied with fresh content anyway), but it also gives you a tiny edge over the RNG gods.

There are plenty of one-time-use items available in the store, but it feels like much of the game is playable without opening your wallet. Items are rarely available within the game, but when you find them, they tend to be given to you right before places where they're the most helpful... which is to say, while you'll likely spend items right away, you can get through most other levels without making a special purchase. When you fail (or exit) a level, you lose one of three lives which replenish on a 30-minute timer, but the timer generously credits you with the time you spent playing that level before dying.

Puzzle to the Center of the Earth wraps its solid gameplay with sharp graphics and an appropriately adventurous sound package. The movement controls might take a moment to get used to (it doesn't take much upward movement to start jumping, though it's rarely a detriment to the gameplay), but it won't take long before you're leaping among the blocks like spelunkers of days gone by. The challenge of creating and maintaining navigable paths and discovering treasures along the way makes this game one you're sure to dig.

Puzzle to the Center of the Earth (iPhone, iPod Touch, iPad)

Android:
Get Puzzle to the Center of the Earth

The game play is fun and the controls are beautifully responsive.
While you can still enjoy the game for free, be aware that there is a hidden 'pay-wall', and you won't be able to
complete the bonus levels without spending money.

I can't pass the level 11. Everywhere I go I will be stucked by indestructible blocks. The only solution is to buy a pickaxe?

@kathleen.indie.gee
Where's the paywall? I'm currently at level 27. I only unlocked the first Underground area bonus level and finished with no problem. What's the bonus level that you have to pay for?

@Maggie Lee
I just tried it again and passed it. Although I haven't got the Star and Switch yet. Are you sure you're not missing the door?

Start by going through the door to the left. That takes you to the right side, where you go through another door. Once you go through that door (you'll come out just below your last position), dig all the way to the left and a little bit down to find another door. This will take you close to the bottom of the level on the left side, and the star chest will be right in front of you. From there, dig straight down to find the switch (though be sure to leave a path you can climb back up).

There seems to be a massive difficulty spike for level 50. I had hundreds of attempts but I rarely could even reach half way through. Any tips?

@Maggie Lee I had gotten stuck at level 11 too, but then I found out I could drop a block down and jump up into the center chamber,

I need help on I think level 23 where the end is several blocks with the spears that pop out and can kill you. I cannot make it across hopping. I made it once or twice to where I had one block left and then get killed by the spears. I'm tired of replaying all levels bc I cannot pass this one.

It's a really cool game concept. I don't know how they came up with it. I loved the first 30 levels, but sadly level 32 has become insanely crashy (perhaps just with the latest Android update). You can easily get through without using any IAP - getting a few of the switches is a slightly tricky challenge, but good fun.