Hey, didja hear the one about the lady who tried to repaint that fresco of Jesus, but failed hilariously? Art restoration is no simple task, and if you're not properly trained for the job, you could end up unveiling a potato with an afro at the big reveal. In Gavina Games' Puzzle Restorer, you can try your hand at fixing up damaged photos by smearing around a puzzle full of paint, no spuds attached. 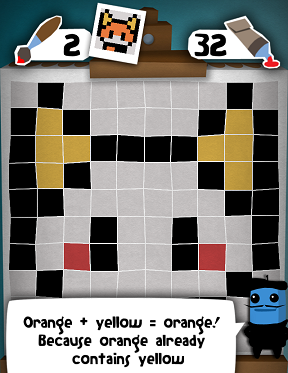 The picture at the top of each level is your target, what the restored painting is supposed to look like. Tap and drag a path from one colored block to smear some paint around, but remember that your path must also end in another similarly-colored block. Once you've made your path, tap the checkmark on the starting point to confirm your move. You have not only a limited number of blocks that you can paint through, but also a limited number of brushstrokes that you can take, so be sure to make every move count!

Paint isn't just smearable though, it's also mixable. When your path of paint crosses a square of another color, the colors will combine in that square, and knowing what each color consists of can help you predict what the resultant color will be. Primary colors mix to make secondary colors according to the standard rules (red and yellow make orange, for instance). Mixing a secondary color with one of the primary colors in it gives you the secondary color again (red and orange just makes orange, because there's already red in orange), but mixing a secondary color with its complement (for example, orange and blue) will always give you black. Black is an important color in this game, as it can be used to mask parts of your path while moving around the grid.

There are 64 standard puzzles to solve, which get trickier as you have multiple brushstrokes to work with, meaning you often have to use one stroke to set up a starting point for a second stroke. By solving the standard levels, you can also unlock bonus levels that throw some twists into the color mixing rules for you to figure out. It's all in a day's work for a professional Puzzle Restorer though. Once you solve a masterpiece, reward yourself with a bowl of fresco au gratin.