Puzzle Quest:
Challenge of the Warlords

Originally released on PSP and DS more than a year ago, Puzzle Quest: Challenge of the Warlords blends a match-3 game with an old-school fantasy RPG. As you roam the overworld you complete quests, earn gold, gain experience, buy equipment and upgrade your stats just like any role playing game. But when you encounter an enemy, a Bejeweled-like tile swapping game appears. Match gems to cause damage and collect mana to cast spells to help you defeat your foe. It's a remarkably well-balanced game that's as easy to pick-up and play as it is to continue playing for hours upon hours. And it's one of the most addictive games I've played in a very long time. 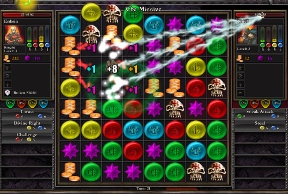 The story behind Puzzle Quest is a standard fantasy tale where you're on an adventure to save a medieval land from ruin. You begin by creating a character and choosing one of four classes, each with a strength and weakness that translates into gameplay. Warriors, for example, are best at dealing and absorbing damage, while wizards excel at casting spells to mix-up the board during battle. Go with a warrior the first time around and don't be afraid to start new games to experience Puzzle Quest as a different class.

After your character is created you set out into the world. The game takes place on an overhead map with towns connected by pathways that branch out in every direction. Move to a castle or town and a number of options appear, the most important being the quest menu. Accepting quests not only progresses the story line but introduces new areas to explore and earns you experience, gold or items. After a few training quests the game opens up and you're free to take and complete quests as you see fit.

The heart of Puzzle Quest is in battle, and the role playing elements wrapped around a simple match-3 backbone is nothing short of enthralling. Each fight pits you against an enemy taking turns swapping tiles on the board. Four colors of gems are on the grid along with coins, stars that give experience, and skulls. Match three like-colored gems to gather magic points (mana) that allow you to cast spells. There are dozens of spells you can use in combat with effects ranging from direct damage to moving/destroying gems on the board, inducing status changes on the enemy, and much more. The extremely robust spell system is just one of the draws of Puzzle Quest battles that makes it a deep and rewarding experience.

Gaining gold, experience and mana from tile swapping is all well and good, but we're here to defeat a vicious enemy! Spells often deal damage, but most of the time you'll do it more directly by lining up three or more skulls on the board. Special red skulls add five to the damage amount, while armor and weapons you can equip (as well as your statistics) can increase that number even more. The enemy has armor to curb damage, though, so each round of combat is almost as intricate as a straight-up RPG if you peek under the hood. 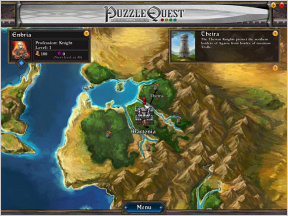 Puzzle Quest features a world of optional content you can explore at your leisure. You can capture monsters to learn their abilities, and some can be used as mounts to help you move across the map. Temporary party members join you from time to time, each lending a unique ability to combat. You can also research abilities and spells, forge new weapons, and lay siege to towns to help increase your gold. The possibilities are practically endless, making Puzzle Quest a rewarding and deep experience from every angle.

Fortunately for casual gamers, Puzzle Quest never forces complexity on you. Side quests, extra spells and additional games are available but not necessary to progress the story or beat the game. Upgrading your stats each time you gain a level is easy, and managing items and spells is a cinch. At its heart Puzzle Quest a match-3 game with RPG elements tacked on, and everything progresses smoothly as you gain experience by defeating enemies.

Analysis: With such enormous addictive powers, there is very little to take issue with Puzzle Quest. The writing and dialogue are a bit trite, but honestly no one plays Puzzle Quest for its story, so it's forgivable. Random battles, which appear as enemy icons in your path, can be a bit too frequent, forcing you to do battle more often than you might like. Some of the opponents are also extremely tough, but you're never penalized for losing. And you'll swear the computer-controlled enemies get a little too lucky with multi-chain combos sometimes...

There's so much you can do in this game you'll practically never get tired of it. It's easy to pick up for a few coffee break battles, but the long-lasting role playing elements keep you clamoring for more. It's the kind of game that will appeal to almost every gamer, so don't let the fantasy setting, role playing elements or even the match-3 game turn you away. Puzzle Quest is very, very good.

well said, john! i'm nearly through with puzzle quest DS myself. who knew you could simply combine two of the most addictive genres imaginable and end up with something greater than the sum of its parts?

This game is GREAT.

This is my first exposure to Puzzle Quest. I love the Warlords series, so I was quite surprised to see that this game takes place in that universe.

It really is a great game for any type of gamer. The only complaint I had was that there isn't any real risk involved in losing a battle - you simply try again. That's probably something many people would disagree with me about, though.

I think from a casual perspective, Acrux, having to replay a battle again is punishment enough for losing, and hence the story does not advance.

Am... am I the only person in the world who doesn't like this game? I thought the RPG elements were bland and the alternating turns element makes setting up cool combos generally not possible without the spells that make the opponent lose a turn. Now, granted, I AM a bit tired of the match-3 type of game, but this to me was the biggest disappointment and was hardly any fun at all. Even more, it seems like it would turn away the more casual gamer with the complexity of the system, and would turn off the heavier game-player with the rather overdone match-3 element.

Well, OK, that was a little long-winded and negative, but I just don't understand what so many people see in this game. Ah well. Can't love em all.

Well, coldfrog, speaking from the point of view of somebody who doesn't really like RPG's, this has just enough diverse elements to make it work without it being too complicated. I am totally addicted to the game, I admit. I hardly ever buy games online, but I did buy this one. I love the visceral sensations that the sound effects create when you injure your foe (or are injured.) One reason it works for me is that I have been able to play and enjoy it without learning TOO much about the spells and weapons and all that, but as I have played it more and more, I realize how that aspect of it adds to the enjoyment of play. I think it's brilliant.

Last November they contined released this game for the PS2 as well.

It is also out for the Mac OS.

This is one of the ONLY RPG-style games my wife has EVER liked and gotten addicted to. Its a winner of a game in my book. Love it.