Here's a familiar scenario: There's a red block that needs to get slid to a certain location and a number of green blocks in the way that can only move either horizontally or vertically depending on their orientation. Cue response, "Hang on, haven't I seen this before?" And indeed, at first glance, Atomic Cicada's block-sliding puzzle game Push Me looks like a standard Rush Hour clone... until you realize the red block can't be moved on its own — you have to push it using the green blocks. Hmm. A little later on, you realize that the red block is subject to gravity, and can fall down and get pushed over edges. Double hmm. 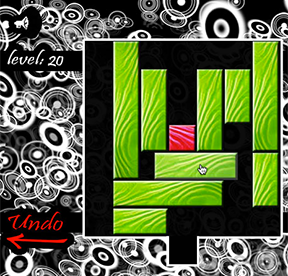 This takes an old concept and turns it on its head with a simple tweak. For each stage, simply click and drag the green blocks to move the red block to the specified alcove on the edge of the grid. (And if you're feeling particularly clever, try to get the "Perfect" by doing it in the least amount of moves.) The falling block mechanic creates a whole new set of rules, leading to some interesting and often ingenious brainteasers. The noisy background graphics are a bit jarring, but luckily they don't interfere with the gameplay.

Giving a much-appreciated twist to a familiar format, Push Me is a refreshing and unexpectedly original piece of logic puzzlery... and with 100 levels, it'll keep your brain occupied for a nice while.

I'm having some head-scratching moments with this game -- it's a real brain-teaser for me. Have noticed that sometimes when the red block is moved, it tends to automatically slide back into its original position unless I block it from doing so. Not sure if that's the way it's meant to be?

The description omits a very important other tweak to the "rules": green blocks can only move in one direction. So far, it's always been horizontal blocks move horizontally and vertical blocks vertically, but I haven't gotten far enough along to know if that's the general pattern.

Also, I'm not sure if it's really gravity that's acting on the red block. At least in the first level, it seemed to want to fall *up*. Or something. Anyway, it's pretty confusing.

Having some trouble on LV 30. I can get my move score down to 16 moves, but it's still not enough for a perfect. Any ideas?

To get down to 16, I'm using a trick I discovered where you can slide a green block under the red block while it's blocked by another green, and then continue moving the green block in a single move. The same trick works with pushing, except when you push the red block over an edge. Also, be careful about putting your green block back in its original position. The game will think you don't want to make that move.

Am stuck on 20 so can't proceed. Going mad. Any and all hints accepted. This game is a great mind stretcher reorienter in space. Thanks for it.

20 is the level pictured above in your review--red really hemmed in.

nevermind! as Emily Latella used to say. Power of posting even when you're just talking to yourself.

FANTASTIC! Definitely a very cool twist on an old fave of mine ;)

you'll need to get the lower-most "2-block" from the far left to the far right, then drop the red block down in front of it. At that point, you just sweep into the goal.

I'm completely stuck on level 30. I'm actually posting this to summon the "Power of Posting" curse. Wish me luck!

Ha! Worked like a charm! I've been working on this level for two days, and minutes after posting, voila.

I was stumped on level 30 for days. Finally went to YouTube for the solution.

Now stuck on level 56. Anyone get that far? Any hints? Not particularly trying to be perfect or even post progress. Just finish so will NEVER have to play this again! :)

Beat it of course. Power of posting again. Though i seem to be talking to myself here haha.

I have almost perfect (99/100) for all except level 30.Just simply can not figure out how to make it perfect for level 30. Still thinking!!!!!! Overall, it is an awesome game.
Thank you