It's hard to find a good hat. You need to find one that fits and flatters and doesn't turn you into an internet meme waiting to happen, so when you find one that works for you, you kind of want to hold on to it. That's why the star of Anton Rogov's puzzle platformer Pursuit of Hat 2 goes to such extraordinary lengths to get his hat back in each stage, even though he's really, really bad at holding on to it. As in the original game, you use [WASD] or the [arrow] keys to move and jump, trying to find your way to wherever your hat has wound up in each level. You'll climb, swing, leap, and, uh... well... literally rip your own limbs off to get it back. See, by pressing the [spacebar], you'll pull off your legs, arms, and even your own torso in that order. Doing so can leave a part behind to, say, press a switch for you, but each one you remove will hamper you... without both legs you can't jump as high, and if you're a head, well, you can't jump at all. Fortunately, you can just press the down key to be reunited with whatever limb you're standing over. 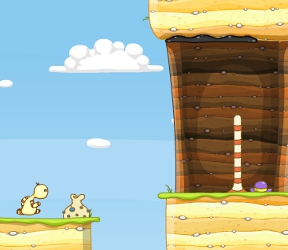 There's always a fine line between "sequel" and "samey", since you want to change enough that the game doesn't feel like a glorified level pack, but avoid making it unrecognizable. Pursuit of Hat 2 pulls this off by focusing on injecting more variety and creativity into its levels with new elements beyond simply pushing buttons that keeps things fresh. Sticky goop, a hat that flees, hungry... uh... thingers that will suck anything the right size in and then fire it back out, all of it makes solving levels a more complicated affair than the original, and experimenting to see how each new element can be used is part of the fun. On the downside, the more limbs you lose, the clunkier you control, which is understandable but frustrating in some cases, and that can be a killer when the slow movement makes setting up the proper chain of events in some stages so important. Still, it's just as beautifully, morbidly adorable as ever with its squishy little animations and funky soundtrack, and the greater challenge of the game's 24 levels makes it feel like a big leap forward from its predecessor. Pursuit of Hat 2 manages to make dismemberment cuddly, but it also manages to improve on the simplicity of the first game without becoming too convoluted, making for a puzzle platformer that's fun, charming, and even thinky in equal proportions.

HAT is now shy, so subterfuge is needed...

There are other ways to do this one, but this is what worked easiest for me...

You need two legs to walk over sticky stuff...

VARIATION on the ALTERNATIVE SOLUTION:
(Thank you, Carny Asada!)

Omigosh ridiculously excited for this.

Gave up on level 8, it appears to be impossible.

You can't climb because you remove too many limbs and it's impossble to reach the sticky from the "green" platform.

First, get to the right of the hat without scaring it off the cliff. Second, remember that you don't have to be level with a button to spit a limb onto it.

I can kick the cannon blob across the gap, so it shoots the hat onto the red button-- but then what? There's no way to climb up there.

Never mind! I figured out Level 16. Had a hunch almost immediately after I posted.

Load the cannon blob with something else BEFORE kicking it over.

I think I see what needs to be done: close the red doors, get the hat on the left door and the character's head on the right door, open the doors. That way, hat and head fall into the cannon blobs simultaneously, and reunite in mid-air.

But how do I trigger the doors opening? I think I need to make the upper cannon blob swallow the limb weighing the red button down, perhaps distracting it with another limb so it doesn't do so prematurely, but I haven't gotten the logistics fully figured out.

HAT is now shy, so subterfuge is needed...

There are other ways to do this one, but this is what worked easiest for me...

You need two legs to walk over sticky stuff...

VARIATION on the ALTERNATIVE SOLUTION:
(Thank you, Carny Asada!)

You can jump over the "cannon sack"

The cannon won't open, or fire, as long as you're standing next to it.

You can move it to where you want it to be before the hat is fired out of it.

Thanks elle! To be honest, though, what I really needed to know before completing the level was that

I could PUNT the Ptooie. (Name based off a Pirahna Plant subspecies from SMB3.)

Heh, yeah, that works, too.

I kept sending it off the cliff, so I developed my own, um, technique. Sort of a convoluted method.

edit: I just realized that the version of the game I played, the levels are in different orders...no wonder why my advice did not help (nor did this reply make any sense!) Sorry about that!

This is really cute and fun so far! A tad glitchy in spots, but hasn't prevented me from passing levels.

I'm still stuck on level 10, even after reading the posted spoilers.

I kicked the Ptooie (I like that :)) over to the platform with the hat by running from the far left end of the platform. Then, I can run back to drop the... orange cactus (?) so the Ptooie picks up the hat. And run back really quick so it doesn't spit the hat onto the tar, but I can't get the Ptooie back to the large platform or catch the hat before it sticks to the tar.

Let the hat stick to the tar. Then find a way to get up there yourself.

Drop a limb in the far left cannon, causing it to roll off the screen. Run right and chase the hat into the lower cannon, then jump onto the ledge to the right of the cannon and wait for the hat to be shot into me. However, the hat flies too high--even when I jump.

Oh, so this is the "power of posting" I've seen people talk about... Or maybe it was just a weird glitch.

The hat barely ran away from me and I caught it.

Haha, thanks, Sonic! Got it!

I found my own way to do level 17 that I don't think was the intended solution.

Jump over the top cannon and then kick it to the right until it falls to the one below, that'll get rid of both of them.

Now just jump up, move the hat to the left until it falls into the lower left cannon. As it's doing that run to the right, fall down to the lower platform, and when the hat shoots, jump out to the left to meet it in mid-air.

Found an easier solution for 19 as well.

Drop an arm onto the lower orange button. Drop down onto the rope on the right, then over to the ledge, and then into the cavern where the hat is now trapped by the orange bar. Easy as that.

For everyone: clicking the "?" bring you to a movie walkthrough, and unfortunately it shows you the intended solutions, that use all things present on the level, while for most levels you can find something way easier and less entertaining to do not even trying to. I like the fact that you can solve things with multiple solutions but when it's so easy that basically it's an exploit it's not fun, while a bit hard I hope they fix that if they make a third version.

Kick the cannon into the right hole, getting rid of it and the one below. Drop an arm on the red button, then climb up and scare the hat onto the red striped bar. Recover your legs, then your arm, then run right and drop down the hole. You will have plenty of time to position yourself for a jump before the left cannon shoots the hat into range.

I knew my solution had to be non-standard. I thought about trying it the way the main walkthrough suggests, but

I hated the thought of having to time both cannons so precisely.

Thank you, Username and Carny Asada :) I added your solutions to the walkthrough.

If anyone else has found uniquely different solutions not listed in my walkthrough, please let me know. It's fun to try the variations for solving this little guy's wayward hat problems!

SO EXCITED TO CONTRIBUTE TO A WALKTHROUGH.

The Kongregate version seems to be different...

The walkthrough is out of order. I think it may just be the Kongregate version, but still.

[Yes, our walkthrough applies to the game here on JIG. With the exception of level 4, though, which appears as level 11 here, nothing is out of order. They're just one-off from level 4 through 11. ;) -elle]

The Kongregate version isn't just differently-numbered levels; the levels are similar but critically different. There's one level where the walkthrough says 'kick the middle cannon', but in the Kong version that middle cannon is behind a gate and stuck to the ceiling with tar. I wonder if the notdoppler version is different yet again?

I played and wrote the walkthrough while Pursuit of Hat 2 was still exclusive to the sponsor's site, then played again here on JIG when we got it, and the only difference (at that time) as is I described. I haven't played the Kong version. But, the walkthrough fits the game we have. ;)