One day, as you were innocently walking down the street, you were abducted by persons unknown. After hours of travel, you saw your chance to escape and took it. Fortunately, you have friends all over the world, and you're sure they would come here an pick you up. Unfortunately, you have absolutely no idea where you are. You'll need all your wits and observations skills to place yourself, but the clock is ticking: you're still being Pursued. Pursued is a unique HTML5 puzzle game designed by Nemesys Games, powered by the Google Maps Street View engine. In each of the fifteen levels, you are plunked down in some location on planet Earth. By dragging the screen to look around and clicking to move, you must explore your surroundings and determine your present city by the visual clues. You only have so much time to enter the correct city, before your kidnappers will catch up to you. A number of additional level packs and fan-made levels are also available, and players can also submit their own locations for others to get lost in. 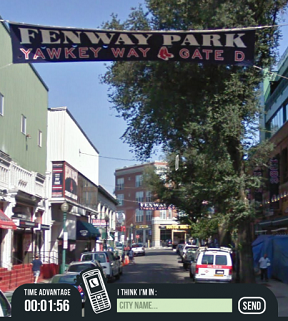 A number of excellent games have been based around Google apps, and, in retrospect, Pursued's use of Google Maps feels like an obvious idea for a game that Nemesys Games just happened to get to first. However, as it turns out, they happened to be the perfect ones for the job. There's a perfect mix of easy levels that plop you next to obvious landmarks, somewhat misleading locations for a medium challenge (e.g. sure, that building has an Italian flag... but lots of Italian restaurants do, whether in Dublin, Istanbul, or Tokyo), and some truly difficult ones that place you in what looks like the middle of nowhere. Pursued is a game that expects you to have another browser tab open, searching for information, but even with the limitless resources of the web at your fingers, the timer keeps things tense. The biggest flaw of Pursued is the rough periods of long loading times that occur as you move from location to location, probably the result of the game pushing Google Maps in ways that it probably wasn't ever meant to. (Installing the Pursued App from the Chrome Web Store relieves some of the loading times, though, of course, that is only possible in the Chrome browser.) Still, Pursued is an engaging world tour of a game, and as it takes you from Nashville to Norway, Bonaire to Zimbabwe, Chicago to Czech and Slovakia, and back, players will find it a pretty sweet journey.

Very cool. I skipped the FB levels and went on to the user created ones--some good stuff in there!

I haven't played yet (about to) but I just had to comment and high-five Tricky for the Carmen Sandiego reference. w00t! :)

and then easy again until

That's when I truly felt completely lost. For a game where you're just wandering around Google maps, this has an amazing atmosphere and sense of urgency and helplessness. It's the kind of game where you just think, "Why has nobody done this before???". I love it.

And of course all I could think the whole time was Carmen Sandiago, one of my favourite games as a kid. RIP Commodore 64.

I did pretty well and enjoyed this game, except for two issues.
First, the images take a while to load (for me, anyway) and the timer is still clicking. There's nothing I can do when the image is just a blur.
Second, on the 9th or 10th level, when I entered an incorrect answer I couldn't correct it. Maybe that was a problem on my end, but I couldn't type or delete the previous entry.

Is it possible to finish the game without using google?

a.k.a. search for the country name and get the capital name, and I try that... and many of the standard level using the capital city of a country.

Fun concept, but can't get past the third level -- it won't let me submit the answer.