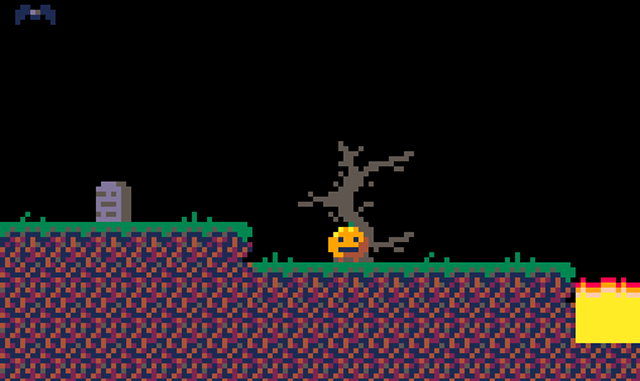 Your orange, round, have a green stalk, you're a pumpkin. No, wait.. you're a Pumpking! On your way through a perilous world inhabited by bats, skeletons, ghosts, slimes, witches and your arch-enemy PewKing...

Pumpking was made in 4 days for Halloween 2017 and has a lot of DOS game influences. You have a healthbar that consists of a couple of hearts, and every hit you take will remove one of those hearts, until there's none left and you have to start over. There are ways to replenish hearts, and that is by collecting those that are scattered throughout the level. It has it's fair difficulty, but as a hardened gamer that grew up with games like these, it's very do-able. To destroy enemies, you have to jump on top of them. And that's basically the only attack you have. Now go, and venture into the scary land of Pumpking, and destroy the evil PewKing!