Ready for a rhythm game that will make you feel like a musical mastermind while potentially sending your synapses into a frenzy? Pulse: Volume One has that power, and this iPad-exclusive from Cipher Prime, creator of Fractal and Auditorium, has both the visual package and musical variety to lull you into a brilliant trance of dot tapping and circle watching. 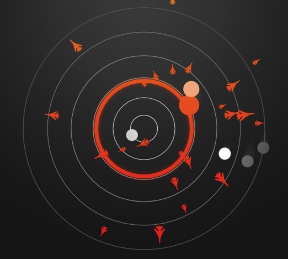 Pulse is a musical rhythm game that takes place over the course of eight levels, each featuring one song that's between one and three minutes long. All you have to do is watch the colored pulsing circle as it grows from the center of the screen and tap the orbiting dots as they light up. Simple, yes? Absolutely. But also challenging, especially when you start seeing late-spawning circles and have to contend with multiple simultaneous circles to tap!

Each song has its own rhythm and sound, ranging from slow and creepy ballads to faster techno-style beats. No matter the genre, your goal is the same: follow the rhythm with your synchronized tapping. The music and gameplay line up so well, you'll often feel like you're playing the music (as opposed to the music playing you), which almost immediately kicks your ego into high gear. "Look at me!", it seems to say, "I'm awesome and can make these spiffy sounds by just tapping my fingers on this here iPad!" Your ego's exclamations may vary. 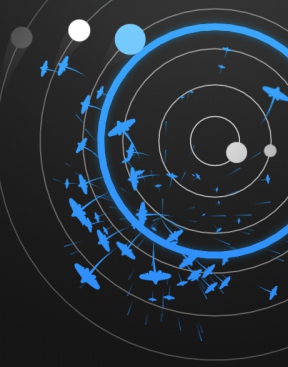 Analysis: Pulse sets a number of milestones for the folks at Cipher Prime, including their first self-published iOS game, their first true music rhythm game, and their first game made using Unity. The same high standards for audio and visual design hold true, though, so you can still expect to find a dazzling feast of graphics to treat your eyes while, quite naturally, an ocean of sound fills your ears.

Rhythm games walk a narrow line that's easy to fall from. Just ask the dozens of music titles that tried and failed to create a substantial and meaningful experience. Either the gameplay has little or nothing to do with the music, or the music relegates itself to the background, providing a mere distraction during slow moments of the game. In Pulse, neither is true, as it provides a rich rhythmic world that's just as much about the sound as it is the touch. Reaching out and physically touching something that seems to make music at the same time is a masterful sort of feeling.

Initially, the first volume of Pulse featured only eight tracks, with the promise of more content on the way. Cipher Prime delivered on that promise and has more than doubled that number via a series of free updates, adding new features like social score sharing and difficulty ratings. Even if you just blaze through from beginning to end, Pulse offers at least an hour of solid gameplay. Part of the fun is going back and beating your previous percentage records, gradually working for that 100% on every stage. You even begin to develop favorite songs, just like when listening to a music album. So, if honing your scores is your thing, Pulse's replay value is great. Otherwise, the visual and musical package alone is worth checking out, just to see how wonderful of a job Cipher Prime has done. Also worth noting is the ability to download music from the game on Cipher Prime's website, something you'll most certainly appreciate once these tunes get wrenched into your head!

Cipher Prime has plenty of updates planned for Pulse in the near future, so if the concept intrigues you, it's well worth picking the game up now. Get your hands on an iPad and download Pulse. You won't regret it!

Pulse: Volume One
(iPad only)

This is a beautiful experience. Totally involving and lots of fun.

This looks... like it goes to the wrong place.

Not sure whether I'll get this one. The price seems a bit steep for a music game with only eight songs. They say there's regular free updates on the way, but I've been burned by that promise more times than I can count.

@Zebruh
The link seems fine to me. Or are you just cryptically bemoaning your lack of an iPad?

...of course you have to buy it. dang, I was looking forward to downloading this on my iPad D:

this is the very first thing i've ever encountered that almost makes me want an ipad.

just wish it was for PC's or the web too.

Too bad its for a bad "console".

Honestly, this game is crap. There's really nothing to it other than hit the buttons. There's no competition, there's no leader boards, and there's absolutely no scoring system. The songs are kinda bland and not anywhere near worth the money the app costs. If you're musically inclined, you'll also be able to immediately tell how horrific the syncing on these songs is as well.

I really don't understand why or how people are going for pulse over rerave, but they really shouldn't. This game isn't worth a penny..... Sorry.