While you or I might not be able to take a bite out of something with eyes, a mustache, and a jaunty makeshift hat, some people apparently do not share our reservations and have no issues with chowing down on a critter able to squeal and look distressed over the fate of its gooey brethren. Since Sarah McLachlan hasn't gotten around to making a commercial about this plight set to sad piano music, it falls to you to take a more hands-on approach to save the day in ZeptoLab's squishy sliding-block puzzler Pudding Monsters. There's safety in numbers, see, since our gelatinous stars simply combine into a hideo... uh... I mean... adorable enormous franken-beast when they make contact with one another. You'll have to make it happen, though, since Pudding Monsters have no feet... and not much traction either, and will go zinging off the edge of the table if there's nothing in the way to stop them. 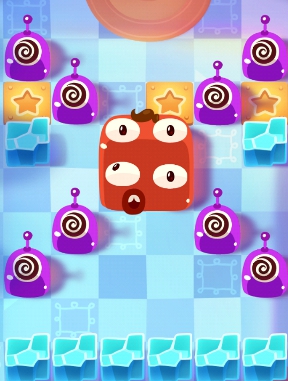 Just tap and swipe on a Pudding Monster to set it in motion, and it'll keep sliding unless there's something in the way. If that something is another Monster, they'll squish and merge together, and the goal is to make sure all Monsters in a level have been assimilated. If even one Monster goes flying, you'll have to start over, and you also want to try to make sure the end result beast is positioned over all three star tiles on the map, since stars are only collected if they're covered when the level is won and are needed to open more level packs. There's more than one flavour of Monster, however, and all of them have different characteristics. Green Goos leave behind a trail of slime that will stop Monsters from sliding past it, for example, and Hypo Goos share a hive mind... move one, move them all in the same direction. To top it off, there are also obstacles beyond your typical household clutter, like ice that shatters once a Monster comes in contact with it. If you're having trouble beating a level, you can buy optional Mushrooms through in-app purchases that will immediately cause all Monsters to multiply until they've come into contact with each other and covered the stars, though this isn't necessary to play and you can earn one or two yourself just be winning stages.

While Pudding Monsters might not bring a whole lot of innovation to its humble genre, it does bring ZeptoLabs' ridiculously high quality stamp of design. Everything about the game is beautifully fluid, from its simple mechanics to its animation, and the clean, vibrant design is a joy to behold. If still sort of creepy since, y'know, who is seriously willing to overlook vocalisations and facial hair on their food? It takes a while for the difficulty to really ramp up, even if you're obsessively going for all the stars, but the various Monster flavours keep adding new wrinkles and challenges to the experience. It may be "easy" to make what is essentially just a sliding-block puzzle, but it's much harder to do it this well and this colourfully, and fans of this style of casual on-the-go gaming will relish another offering with the developer's gleaming polish all over it. Currently, there are 72 levels available with more coming soon, and one can only hope an update eventually includes the Magician Howl and his own brand of slime as a playable Monster. (Hey, we can dream, right?) As it stands, however, Pudding Monsters is a beautifully made, fun and funny little puzzler that deserves a spot on any casual fan's device... especially since an Android version is coming soon as well!

Level 2: Around the Corner

Level 4: The Bigger the Better

Level 6: Time to Wake Up

Level 8: Pieces of a Puzzle

Level 16: Think it Through

Level 4: Donuts for Everyone

Level 13: Lost in the Woods

Level 15: You Make Me Complete

Level 18: Bounce to the Stars

Level 2: Around the Corner

Level 4: The Bigger the Better

Level 6: Time to Wake Up

Level 8: Pieces of a Puzzle

Level 16: Think it Through

Level 4: Donuts for Everyone

Level 13: Lost in the Woods

Level 15: You Make Me Complete

Level 18: Bounce to the Stars

It seems like a lit of levels, but they go by quickly.

I would consider playing a version with harder levels and might I suggest an undo button.

This would be a great kids game, not too difficult, puzzle solving and easy to play.

I isn't an undo button, but the circular arrow at the bottom of each level allows you to restart the level.