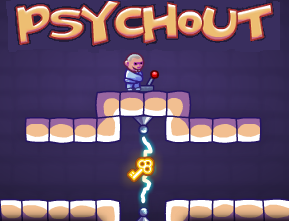 Find the key, get to the door, advance to the next level. Sounds like your everyday platform game, right? Well, it could be, but not in this puzzling instance. Strap on your straitjacket, and step into the psych ward of Funcrow's Psychout, where not everything is necessarily what it seems. Level by level, the laws of physics will continually change; sometimes gravity is controllable by a press of your finger, and sometimes you can scale a wall, and cling to ceilings just by walking. See an insurmountable trap? As long as you embrace your insanity, the challenge just might be easier to overcome than you initially thought.

You control your little psychotic with the [WASD] or [arrow] keys. During gameplay, you will encounter red-knobbed action levers, that have different uses on different levels, and you can activate or deactivate them as necessary with the [S] or [down] key. Impish graphics and music straight from a madman's circus add to this whole experience, as well as a few obvious gameplay nods to classic games like Pong and Super Mario Bros. Escaping from this asylum probably won't take you as long as would to break out of a real mental hospital, but it will provide you a fun little diversion from the everyday world of sanity.

It was fun, until I got squished between a platform and the wall on L14, and simply vanished while the game kept running.

No reset mechanism, no save, no being bothered to try again. Looked nice enough though.

I had a similar problem to (Un)LuckyDee, but fortunately I wasn't as far in to the game. On Level 5 my little psychotic got stuck running to the left forever, and I had to refresh. The lack of saving is annoying, but the game itself is quite clever, mostly casual and well worth playing as long as you don't run into any late bugs.

I liked the ending, but will say no more. :)

I wasn't so keen on the cheap deaths on some levels but there weren't many of those, at least.

I had the same problem too. I don't know what the level number was, but it's

the square level with levers on all four walls. I flipped them several times, and then one time the room rotated and caused me to disappear.

I couldn't do anything and had to reset the game. I understand that some errors are very hard to pinpoint, but the developer at least needs to add a save feature. Being unpredictably forced to restart the game from scratch is the opposite of fun.

I think the problem is that the version hosted here is not the latest one. It has been updated on Kongregate to include autosave.

New version online! The game has been updated to the latest version here on JIG. (Thanks, yaddab!)

I'm gonna put my whole comment inside spoiler tags to not give anything away, but it's about the controls...

Frustrating. Maybe they're doing it to be cute, maybe trying to be inventive, maybe it's part of the storyline, but the lack of consistency on the controls killed it for me.

There were a couple of levels where the control scheme changed in the middle of the level, and it felt like just a cheap gimmick. I could understand (possibly) changing the scheme a bit between levels, but for the controls to sometimes function the same and sometimes backwards (while you're on a wall, or upside-down, for instance), and sometimes sideways... that drives me crazy. Sometimes, the "jump" key is relative to your feet (up toward your head), and sometimes to remain with the "up" key - with no rhyme or reason... enough for me.

I had high hopes for this game; I like the visual style, and the detail on the "rubber room" is pretty cute - also enjoyed the Mario references, but the controls were too unpredictable.

It might just be me, but the fact that the ending says

there might be a different ending, a sad ending maybe?

CrankYanker: I have played the game through a couple of times, and there is no level where, as you say, "the 'jump' key is relative to your feet (up toward your head), and sometimes to remain with the "up" key." "Jump" is *always* the up key, and when you jump your character always jumps away from whatever he is standing on (toward his head).

The only time the controls get somewhat confusing is when, for instance, you are pressing "right" and, after you walk onto the wall and then on the ceiling, "right" is still going in the same direction (which would be left, in this case, since you just walked on the ceiling), unless you release it and then press again, in which case the controls correct themselves. This is simply so you do not have to think about changing directions while you are in a continuous run. There is also one room, where you run around all four walls while avoiding spikes, where "right" is always "forward," toward the door, even if you depress it on the ceiling.

That, effect and one level, where your guy suddenly changes directions when you come out of a door on the ceiling (from "forward" to "actual right," to no ill effect), are the only areas where the controls could seem weird if you stopped to think about it.

However, if you consider the alternative, that you would be using "right" to go across the bottom and up the right wall, and then suddenly upon hitting the ceiling you would change direction unless you started pressing "left," (effectively sticking you in the corner as your character went back and forth between the ceiling and the wall), I think what the author has done is simply the most fluid and obvious choice.

Got stuck in a corner on lvl 5. No keys would work after that. I couldn't move, and couldn't find a way to restart the level.