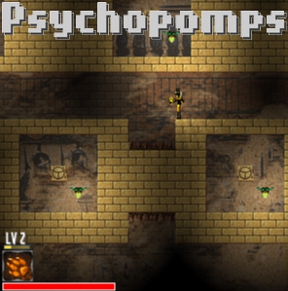 Ever have one of those mornings when you've grossly overslept, can't decide whether you should be eating breakfast or lunch and your phone's blinking with a voicemail from your work? Usually, you can simply clean yourself up, apologize profusely to your boss and show up to work a little embarrassed and disheveled. Not so for Anubis, the main protagonist of the retro metroidvania platformer Psychopomps, developed by Team Psychopimp, made up of Phill Spiess, Tan Teck Wang and Jordan Roherty. When Anubis oversleeps, his fellow soul ushers are imprisoned and evil spirits become powerful, having profited from their absences. There's no time for him to groggily shower and eat a bowl of cereal... he has to be out the door and ready to pound on some bad guys to rescue his fellow psychopompers and set things back on track.

Using [WAD], move Anubis around while aiming and shooting with the mouse, and using [S] to interact with your environment whenever a question mark appears overhead. Once you've rescued your fellow psychopomps, you can choose to play as them by pressing [1], [2] or [3]. As you get to play each character, you'll find that they have different attacks and abilities, which you'll have to use to your advantage to get to the end. Killing an enemy rewards you with coins, which increase your experience, and red soul orbs, which replenish your health. Fill your experience bar to upgrade your weapon, but while each character has a different experience bar, all of them share the same life bar, making finding the hidden heart upgrades essential! 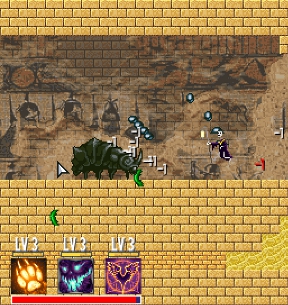 Analysis: If you enjoy playing characters that are a little dark and, perhaps, a little evil, you may be attracted to this game from the get-go. Cue the 8-bit music and pixelated jackal-man, and it might be love at first sight. Team Psychopimp has really delivered a game that perfectly captures the spirit of classic metroidvania titles without making it feel as if it's just "more of the same", something you've seen a hundred times before. It helps that the concept and characters are so neat, further carried along by some solid writing, and makes for an experience you'd really like to see more of, and more fleshed out, in the future. The game is difficult enough to keep most players interested yet easy enough for the more casual player to finish.

There are a few issues, such as jumps where you have to go up through a gap one square wide that can take several tries to get exactly centered and make it through. Areas also tend to look similar enough that they can feel a bit repetitive, and don't provide enough deviation to really make you feel like you're exploring. Other complaints are quite minor, however, such as having to wait for some of the dead enemies to spit out their reward. Considering the game was made in only one month for Something Awful's GameDev VI Challenge, it's quite impressive indeed. If you can make a game that doesn't feel like it was crunched out under a time limit you're doing something right, and the effort they've put into the game is obvious. If you're a fan of retro aesthetic with old-school metroidvania style platforming gameplay, you'll definitely want to give this one a try. After all, if you're late to work because of it, well, at least you don't have dark spirits lying in wait to steal your job, right?

It's a good story, thus far. I've gotten some lag, but it went away after a minute or two.

I am not sure I would label this a Metroidvania game. It's close, definitely more that than a standard platformer, but it was really more action-based than anything else. Those red birds really suck.

Still, for a game that was made so quickly, I'm very impressed. I can't wait for the sequel, which ideally would be fleshed out a lot more.

LWK is right about those damn birds. The first time you see them, you might as well get used to them because they will constantly harass you until the end of the game.

*Psychopimp*? It's in the second sentence of the analysis.

This game has the bounciest coins in video game history.

I agree this isn't really a Metroidvania. It guides you round the map in a pretty strict sequence; the bonus hearts are no more than the kind of bonuses you'd get in a Mario game. The one exception is "there's one piece of water you have to come back once you can pass water". Even the Valkyrie's ability is barely relevant.

But viewing it as a platformer rather than a Metroidvania, it's fairly fun as platformers go. I only died twice, both on the final boss. Quite impressive that it was put together in such a short time.

Interestingly, the health bar didn't show up for me. I was always guessing how much health I had left.

I have mixed feelings about this one. Part of the time I love it, but the platforms in some areas frustrate me REALLY quickly. The bosses weren't too hard. The hardest part of one boss fight was actually those red birds coming at you and not the boss itself. I like the graphics and the music fits well.
One major complaint is those tiny little coins. On one hand I love how there's actually a REASON why enemies drop coins and it's mythologically canon which I LOVE! But they're so damned small and they roll away so fast I just said screw it in several areas. Which sucks since getting hit lowers not just your health but your level too. I can see how it would get overpowered otherwise, but it really hurt during gameplay.

Not sure if this is a spoiler, but since I'm talking about an ability that surprised me when I got it, I'll put the tags up anyway.

As an aside I LOOOOOVE little jackal Anubis! It's SO CUTE!!

It's a Metroidvania, the reason it's so linear is because it's clearly influenced by Cave Story. Anyway, the final boss needs a closer save point.