Providence by Eight Bit Skyline is a free indie interactive story where you watch two men's destinies intertwine, and while usually that is a line in a romance novel, this is anything but romantic. This dark tale may seem confusing at first as you jump around a timeline with few references to where it falls into place, but there will be a certain point where it all clicks. This drama that plays out before you will leave you with chills as you watch the morning, evening, and night of a life. Using the [arrow] keys to move, you can interact with objects with the [spacebar] when their name pops up on the bottom of the screen. When you have items to use, you press their corresponding number when their picture also appears at the bottom on the screen. When any new action comes along, instructions come along with it, so you can always just enjoy the story and not fumble around with the controls. And when it comes to gameplay, it is all about this dark adventure and the story that forms from it. 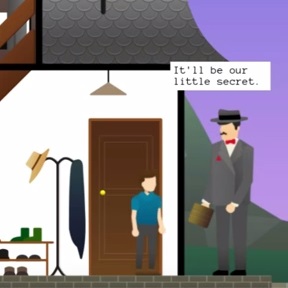 While in the game you are given lots of choices, whether it's how you reply to others or even some serious actions, the storyline is already built into place... there's a predetermined end to this game, and nothing you do will change it. Some may be dissuaded by this, but I think being able to alter the consequences would have completely undone the writer's message. The choices along the way help you feel as if you are part of the tale, even if in the end they don't matter. The simplicity of the artwork is so well done it only compliments the complexity of the tale, and the classical Chopin music that plays throughout is so fitting you may think that the classical composer wrote specifically for this game. It's the perfect bow on this pretty package of a well made game. Though this game is more like a short film it still has room for a little bit of problem solving, but even without it Providence would still be worth a play through. With it being on the shorter side, you need maybe less than an hour to play, there isn't a reason not to sit back and watch this story of the past crying out for future consequences.

Could someone explain the plot? I am so confused, thanks!

The old man at the beginning is the same creepy man who shows up to the little boy's doorstep with that weird box. I never figured out what was in the box, but I'm guessing drugs or a bomb or something equally illegal. That man killed the little boy's parents, probably because the boy didn't keep his mouth shut or because he didn't want to take chances.

The little boy became so psychologically traumatized by this that as an adult, he became a contract killer for organized crime. We see him kill the dude at the train station and carry out some hotel massacre. The scene at the end is the little boy taking his revenge against the man who killed his parents.

I think the boy coped with his parents' murders by shutting off his empathy. As shown in the end, though, he carried around hurt and resentment for years despite his efforts not to care. Otherwise he wouldn't have bothered killing the man who'd made him an orphan.