Martin is a game design student in Karlskrona, Sweden, and instead of programming shaders (*shudder*) he decided to follow his heart and inspiration derived from the Experimental Gameplay Project and do some rapid prototyping instead. 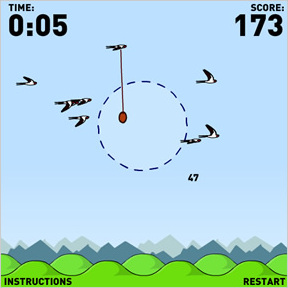 For the past five weeks he has been hard at work rapidly developing ideas into game prototypes, using Flash, at the rate of one game every three days, or so. He added constraints to his designs by selecting two words from his local newspaper to serve as the theme for each game under development. The results of his "prototyprally" are creative, aesthetically appealing, and worthy of some attention. The following are my favorites:

First up is Martin's latest effort. Swallows is a game built within the theme of birds and pendulum and incorporates some fun elastic physics to play with. The objective is to keep the coconut within the dotted circle for as long as possible. You do this by click-dragging on a bird to draw a string from it to the coconut, using multiple strings and passing it between birds to move it as desired. You have 60 seconds to score the highest score you can, and if the coconut leaves the play field you lose half your accumulated points. A tad frustrating, but fun to play with anyways. Click.

Hovercrafty is not only a great name for this next game, it is also my favorite of the bunch. It was a game constrained by the words: swamp and secret. Using just a grappling hook for control, latch onto available anchor points to swing your hovercraft around and navigate the swamp to collect as many pills as you can. A small arrow will indicate the direction of the pill. To use the grappling hook, just click on a nearby anchor point. If successful, a line will connect to it and create a means for changing direction. It can be frustrating when going fast, as the anchor points become difficult to click on precisely, though it's a great idea that I'd like to see expanded upon. Click.

Although Martin is done with his rapid prototyping project, he has moved onto a new game project that will be built over the period of the next 5 weeks. He plans to continue to update his blog with his progress, as well as add post-mortems for each of his game prototypes from this project. Keep up the great work, Martin! =)

With kind thanks to Wouter for the tip.

HoverCrafty is really really fun as it is, and Fungus has a great potential, but too crazy for me.. Very creative fellow!

Well, thank you for writing the review! I really enjoy hovercrafty, it's like "teagames physics meet high wheels/geartaker/twinspin gameplay". I hope he's getting back to this games later to expand them.

Brilliant. My only real complaint is with the first question, just a matter of weight ratios, really - a five ounce bird cannot possibly carry a one pound coconut, even if he does grip it by the husk.

I'm really getting a kick out of isotope: link

Probably my only complaint is that it will only do one cycle, but other than that, it's a fascinating tool to play about with. You can also load other people's designs; for fun, try this one:
1:60:2.5:50:1.5:60

Hovercrafty is nearly impossible with my touchpad... :)

Fungus has the great idea out of the three :)

LOL!!!!! Did anyone else notice that Swallow is a tribute to Monty Python and The Holy Grail!?!?!? Or is it just my wishful thinking . . . .

I believe Crab also caught it. ;)

Does anyone know if the swallows are African or English swallows?

I believe they are European swallows, from the author's comment on the game page.
Unfortunately I didn't see an airspeed indicator anywhere in the game ...

Here's a really neat one for Isotope, but its a long one:

Speaking of rapid prototyping, what good, free tools are out there for rapid prototyping of games. I'd like to try my own hand at game design sometime, but I'm not sure I'm ready to invest in a proprietary tool like Flash.

Ben - I'd say there are a couple of things to consider when deciding what platform to use for your prototype. First of all consider what type of game it is that you want to create; and then pick a platform appropriate for that game type while considering the level of expertise you have with the various development platforms available.

If you're a whiz with C++ and DirectX, or with Java, those platforms can work extremely well for creating prototypes quickly.

Flash is also a great platform for creating and testing prototypes quickly for a variety of game types, but it's not for everything.

Director is another excellent for prototyping, and it even has a decent 3D implementation within which to work.

If you're in education, both Flash and Director can be purchased at a significant discount, though without an upgrade path. And both offer free 30-day trials.

Unfortunately, the airspeed velocity of the unladen swallows is too high for me to be very sucessful at that game.

A little bug that I found is to hit the 'import settings' button while it is in the process of drawing a picture. Several interesting things happen:
- It doesn't clear the screen
- It resets all the hinges to straight
- It doesn't reset the bar to pointing toward the top of the screen

This allows for some crazy stuff to happen. Try it!

There is a new version of isotope up and it is much sexier.

Did better than my last one where I had around 110 births and a similar death count.