The brutal Machines have been running the show for a long time, but hope for the enslaved arrives in the form of furry, pink, multi-armed and multi-gunned Belle, the star of NC Soft and Fabrication Games' iOS title Project 83113. Using her acrobatic platforming talents and flair for action, Belle will run and gun her way through hazardous levels full of metal enemies in a race to the core to take them down once and for all. Though short and perhaps a little tricky to get the hang of, it's a slick and stylish sci-fi blast packed full of lasers, explosions, and, most importantly, the cute. 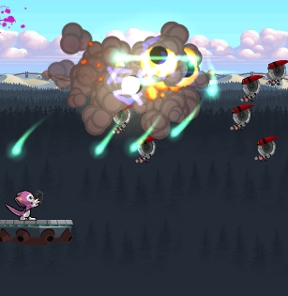 Controlling Belle is simple in concept, but requires some quick fingers to master. She'll continue running left or right when you swipe in that direction and stop if you press and hold on the screen. Swipe up to jump, and tap and hold while she's in mid-air to slow her fall by gliding. Swiping downwards will cause Belle to slide underneath any obstacles, and she can wall jump by swiping away when she's clinging to the side of something to boot. If all this sounds fairly rad for one little pink critter, wait, there's more! Belle will automatically fire at any enemies in her path, and tapping on them will unleash a bigger blast that will drain some energy, while hitting the bomb icon will devastate almost anything on-screen. Destroyed enemies will release green light that can restore Belle's health, represented in the top-left corner, but if she takes too much damage she'll respawn at the last checkpoint she passed. If you're having too much difficulty making it through a stage alive, you might want to replay previous levels to nab more crystals you can spend on weapon upgrades, or keep your eyes peeled for blueprints you can use to build bigger guns altogether.

Platforming on a touchscreen device is kind of a tricky beast to wrangle, and as clever and responsive as Project 83113 is, if it's your first touchscreen platform rodeo you might find it hard to get the hang of. Fortunately, there's no real penalty for dying other than getting booted back to earlier in a level, so you can spend some time mastering Belle's moves without ever feeling like you're failing. The game is gorgeous and full of flashy action, despite a feeling of repetitiveness to some of the levels, and managing to nab all the medals for a level always feels like an accomplishment. On the downside, it would have been nice if the story had been better integrated into the game itself rather than left as unlockable tidbits, and the crystal pieces you'll gather versus how many you need for upgrades will probably force you to replay stages a lot unless you feel like shelling out for a bunch of them through an in-app purchase. With fantastic style, tons of action, and flair to burn, however, if you're up for the challenge, Project 83113 is a remarkable little action platformer well worth checking out.