Connor Ullmann and Noel Berry deliver a psychedelic, challenging platformer in Prism Panic, a game where the world is being torn apart by dark energy and it's all your fault. See, you chased down and accidentally activated a mysterious prism that has sent dark mirrors shifting throughout the land, turning both the formerly harmless flora and fauna deadly whenever they pass through it. In order to set things right, you'll have to track down the dark mirrors in each zone and defeat the bosses guarding them. Move with the [arrow] keys, jump with [Z], and attack with [X]. [X] can not only be used to bust down certain blockades, though, but also dash through the air a short distance (even upwards!), letting you cover gaps you couldn't just jump across. If you take damage, you'll explode and be booted back to the start of the last area you entered, but since they're small, it's usually a short trip. And hey, it's going to give you plenty of opportunities to practice your wall-climbing! Over and over and over. 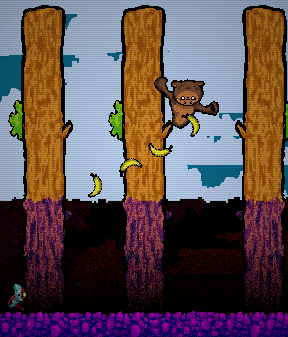 Like most one-hit KO platformers that require fast fingers, Prism Panic is going to appeal to a very specific sort of gamer. For some, practice makes perfect and that's the way they like it. For others, getting blown up because they zigged when they meant to zag two steps from the end of an area they barely made it through for the fiftieth time is frustrating no matter how you slice it. Though the game is largely fairly simple in concept, Prism Panic's lovely retro style and beautiful soundtrack by Liam Berry is a pleasure. Figuring out how to make the land and the animals work for you in both shadow and light takes some doing, but also provides a bit of unexpected pleasure as you learn the rules. Make no mistake, the game is hard, but never really feels unfair, and if you're looking for a challenge, then Prism Panic will meet you head-on.

Does it save the progress?

How on Earth am I supposed to damage the first boss? It won't save my progress otherwise...

It was better than I first assumed. The in-game picture in the review doesn't quite give the game credit. The difficulty is just right to keep you going I think.

Avoid the bananas and jump at the end wall either side to align with him. Just before he throws the last banana you have a second to jump and speed at him (x). Then he falls down the tree. He needs three hits. The two next hits are easy, if you tackle him at the slowmotion part before he starts throwing bananas again.

Thanks. I figured it out shortly after posting.
I know there are several 'safezones', but I wish it would record progress. Perhaps nullifying the score if you have to return to that point, but allowing you to continue on.

My love/hate relationship with this game is firey. I'm on the last level (I think).. and I think I've reached my 'died a billion times' threshold on just level 1/5. THIS BETTER BE WORTH IT I'VE SHED MANY A TEAR OVER THIS NO-SAVING THING.

The game was very fun but I found the ending a bit pointless.

When you defeat the final boss, he is destroyed, and the credits roll. That's it.