I'm passionate about a lot of indie games for a lot of different reasons, but I've found few to be as addictive and infinitely enjoyable as Level Up Labs's witty and challenging tower defense/RPG hybrid Defender's Quest, a game I've logged an untold amount of hours on and still pull out and play today. With engaging, strategic gameplay and a cast of memorable characters buoyed by great writing, it's simply one of the best and most original defense games you can ever hope to play. (And you can even play the demo in your browser!) So it's big news that Defender's Quest II has finally officially been announced, and though it's still in early development, here's why you should be excited... and consider pre-ordering your copy early! 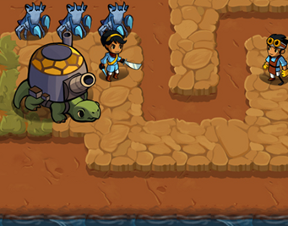 Unlike the original, Defender's Quest II takes place in a world where the surface is covered by a heavy toxic gas known as "Mirk", which as you can imagine means life is less than idyllic. Scavengers willing to brave the dangerous wild through the use of domesticated giant monsters on whose backs they build airtight capsules bring back ancient technology to the few struggling cities, but it's not enough when most of that has to be sent to the empire as "tribute" to keep from being razed. In a world where everywhere is deadly and everyone is out for themselves, including seemingly our heroines Javir and Terevan (and their giant turtle-tank Bitey), you have to be smart and gutsy to survive... but will that be enough for you?

You can consider the gameplay a sort of mix between visual novel, RPG, and tower-defense. During battles, your "towers" are actually the characters you've recruited, placed around a map to deal with incoming enemies, and this time around, you can expect a lot more strategy. Every party member will be a character in the story with a speaking role and their own unique character class and upgrade tree (twelve in all!), duking it out across bigger maps with destructible terrain against more varied enemies with their own new abilities. The game is also getting a significant graphical overhaul from its predecessor, including animation by Dean Dodrill of Dust: An Elysian Tail fame. These changes are just the tip of the iceberg in a game that its talented team wants to make even bigger and better than the original using feedback from players.

You can find out more over at the official website, and although the game's release is still far, far, frowny-face-far off, pre-ordering now for $15.00USD ensures you not only get both a Steam key and DRM-free copy when the game releases, but also a Steam key and DRM-free copy of the original game. If you consider yourself a tower-defense fan, this game needs to be on your radar, and there's no time like the present to get in some time with the original game!

So excited to see this in my inbox yesterday! I get paid tomorrow and will be pre-ordering!! Best game of the year last year, and I'm still playing it.

I played the Defender's Quest demo a few times when it was first featured here at jayisgames and finally bought the humble pack with Defenders 1&2 today, but it's been awhile...and I'm uncertain what to do with the key code. Do you type it in at the end of the demo?

I've had fun finally playing the original defenders game and completing all the achievements. Also, their customer service support team took the time to answer my many questions in a very prompt manner and I'm sure they will be a lot of help when the new game arrives. :)