The good thing about being an adult is that you get to make your own decisions. The bad thing is that you have no one to blame for them but yourself. Pretentious Game, Pretentious Game 2, and Pretentious Game 3 by Keybol all take a close look at difficult life choices, heartbreak and the pursuit of happiness (or, if you're in your twenties, it takes a look at a typical week). During the course of the three episodes in the series, you will be in charge of various characters. Your goal stays the same, though: solve the little platform puzzles that present themselves with each new screen using the [WASD] or [arrow] keys to walk, jump and reach either another person or the other side of the level. 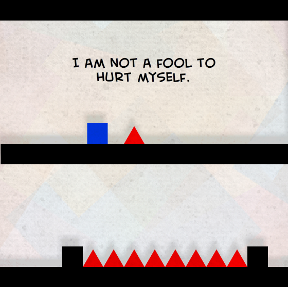 Each screen comes with a line or two of the characters' inner monologue which ties in beautifully with the actions you have to take, and often provides important clues. Even though the game design is as simple as can be, it's surprising to find out how well it can reflect emotional states as well as hide tricky puzzle solutions. Pretentious Game isn't difficult at all (though there might be a few levels you'll have to replay several times), and all three games are definitely short enough not to outstay their welcome. However, the main feature is the story, a dramatic tale of love, loss and trying to find yourself. It's engrossing, even surprising at times, and playing characters with different points of view helps make the whole series a lot more cohesive and complete.

Pretentious Game is deceptively simple, but ends up reaching farther and deeper than it might seem at the start. It's easy to like it, even if you don't particularly identify with the protagonists, as the visual style and the puzzle aspect make for an enjoyable experience.

Awesome (triplet? triad? triptych?? trio???) of games. I must confess I loathe the endless platformers with a message to impart upon the players and a deep and meaningful story to tell. (The exception being Thomas Was Alone. That game was amazing.)

Knowing that these games were making fun of the genre whilst embracing it made this all the more enjoyable. However I can't help but feel that maybe the review didn't get the meaning of the word Pretentious.

Also, I would really like someone to conclude the whole picture, since it gets too deep for most of us to understand what's actually happening.

I can probably come up with a synopsis. I put together the no-one has to die synopsis, after all. Give me time...

I am stuck at pretentious game 3,the "i said open the door part..." what should I do to pass the level?
I have tried to make all three square together...

Dump Magenta off the level, and the switch will work.

In the second game, how do I get past

I figured out game 2.

I hate those game that force player to sacrfrice one or some of the characters, especially when you can achieve the goal without losing anyone orginally!!!

Oh my gosh game 2 made me jump

Hmmm. Odd--the first game has Magenta and another Blue at the end for me, not a Grey.

@vulpisfoxfire: That's because at the time that game was made, the creator hadn't come up with the bigger story yet.

In first game I'm stuck on:

or make a way...use mouse

Does anyone know the title of the music to this game?
I recognise it from somewhere.....?

@ rookwings: They are the Gymnopedies by French composer, Erik Satie. Here is the Wikipedia entry: http://en.wikipedia.org/wiki/Gymnop%C3%A9dies_(Satie)

Fantastic games. The third one got a little challenging but I got there in the end.

Great game.
It remains me a lot of Fiasco, the RPG. Simple but with great history.
By the way, I hate Gray.

Just finished the game. Was pretty good.
However, I do feel sad for peach and blue.

You should use the mouse to

click on the dark red squares just above the "or make a way" text. They will disappear and make a tunnel for you to go through

Couldn't get to the first game from your link: it never loaded after the ad (Chrome 28 on Mac OS X 10.8, Flash Player 11.8). The version at Armor Games (http://armorgames.com/play/13225/pretentious-game) works.

@jim_in_oz:
The music is in Satie's style, but it's not actually Satie.

In game 3 I am stuck on where you have magenta fight the current that is pushing her away from gray. Any luck on this level? It'll be greatly appreciated. I believe the clue is why but that's all I have.

Ah, yes, that one is a little tricky.

It says you have to "question why", which is a hint to click on the "?" button (the walkthrough). As soon as you click on that, magenta will move much more easily and you can finish the level.

thanks so much for helping.

I was stuck in the part in PG3:

I can only have you when she is gone

@ Marcvryant Gonzales de Guzman
You have to

get rid of the wife (peach) by making her fall off the screen to the right, then move the mistress (magenta) to meet the guy (grey).

How do you get past the part?

in the second game, here's what you do (or what I did, at least):

Double jump straight up
At the peak of the second jump, QUICKLY move to the right wall and just wall-jump like mad.
If you time it right, he'll still be in "invincible" mode from getting hurt the first time when you get up the wall.

1,879 Views
5 Comments
chrpa— Jayisgames needs your help to continue providing quality content. Click for details Hi, the new Weekday Escape is here! With Selfdefiant you visit shortly Colorado and Connecticut, and then comes Amajeto with their latest game in a new style...  ...