Ocotober 18th, 1897. The city of Antrim in the country of Galicia. For the past five years the country has been torn in violent conflict between two ideologically and economically divided communities. On the precipice of a ceasefire, a high school, one of the few institutions to not segregate the two communities, has been vandalized. The uneasy peace has been made even more uneasy, but a benefit gala is planned to raise money for repairs. Rich and poor, influential and ambitious, they have gathered under one roof. You are an agent of death. The books of fate must be balanced, and one of these people must die. It is your choice; a choice that will change history. But how much should you meddle with mortal affairs? Perhaps a random choice is the fairest? What other effects could your involvement have? These are the questions you must consider in Postmortem, an adventure game by Jakub Kasztalski, a graduate student of Comparative Ethnic Conflict. 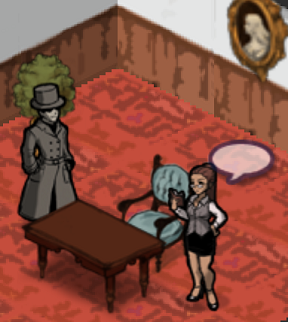 Move with the [WASD] or [arrow] keys and use [E] to open doors, examine materials, select a people to converse with. During conversation, use the [1]-[9] keys to select the desired option you wish to say. [Q] or [N] will bring up your notebook, where you can review information that you've discovered. When you have made a decision as to who you will target with death, you will press [Tab] and then confirm your selection. How you make your choice is up to you, but you will receive a summary of the effects of that person's death and the future of the country of Galicia.

Analysis You will probably know right away if Postmortem is the game for you. There are a lot of words, the plotting is dense, and the relationships between the characters complex. It is, in short, a game of intrigue. And if intrigue intrigues you, then this will certainly intrigue you too. There is much of The Last Express and The Walking Dead in this game, in nuance as much as in gameplay.

Any game that seeks to tackle the deep questions of philosophy and politics must have writing that can do the subjects justice, and, fortunately, Postmortem excels in that sphere. If you can accept that characters would be so quick to offer their views to a total stranger, then you will find their characterizations and dialogue realistic and thought-provoking. Galicia is at a time and in a place very much apart from the world we live in, and yet the topics that concern its inhabitants are universal, as are their flaws and prejudices. What's more, it is not a work where you must patiently wait while characters expound on their beliefs or which the author seems to be leading to a particular point: you can argue and challenge, and though they will offer arguments in return and call you out on inconsistency, you can effect great change in Galicia's future with a proper word at a proper time. It just might not be the change you expect. 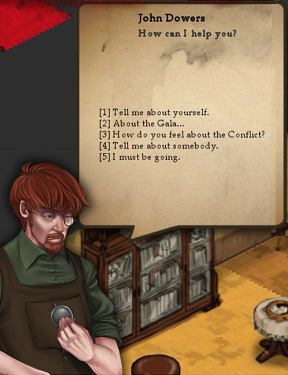 The cost of a such a fully-realized world is a large amount of background information to get through, and enough text that sometimes the "visual" is pushed out of this visual novel. (Presumably Kasztalski's professors weren't patronizing, but darn well expected that the assigned reading would be finished by each class.) The game has great replay value. However while each go through can be as long or as short as you wish it to be, most people can only talk about politics, even fictional politics, for so long before they need to take a break with pictures of cats falling asleep.

As a side note: one aspect that feels like a missed opportunity is the way Postmortem handles player customization. Your avatar of death can appear as either male or female, but the changes to gameplay and dialogue are cosmetic. For many games, this would be sufficient, but as Postmortem specifically considers the evolving role of women in Galician society as a plot point, with both feminists and chauvinists amongst the characters, one would think that quite different conversations might be had. A minor quibble, but it seems a curious omission in a game that takes its depth of interaction quite seriously.

Postmortem is available as both a free download and in an extended cut at donation levels ranging from "Poor College Student" to "I <3 Indie Devs". Those interested in an exploration of how games can approach political questions with maturity and insight should definitely give it a play as soon as they can. After all, no one can confidently say that they'll still be living tomorrow.

I adored this!
It seemed like there could have been a little more polish, but I paid 2.99 for this, and felt I received a stellar experience.

So, is there any way to get the

5-point plan approved? I've found that killing Dowers, the watchmaker, boosts his sales and gives funds for the mansion owner. Making the young revolutionary progressive helps the feminists, and keeping the woman from expressing her radical views keeps her popular. I can't get more CEOs to get on the side of the plan though, which is what the paper hints at.